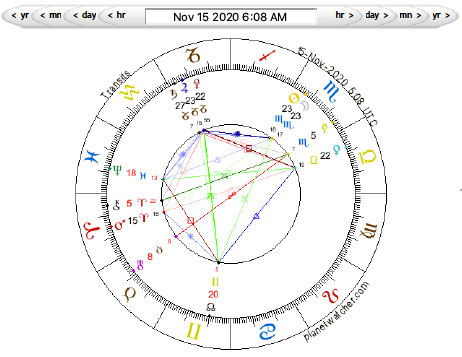 The New Moon in Scorpio is always a good opportunity to cleanse and purge the system. Which is not to say that letting go comes easy. Attachment, even to pain, can stand in the way.

Yet, we cannot let the new energies in as long as inner space is crowded with things that are holding us back. This is a good time to reflect on change and on letting go – and then to let action follow thought.

Without such inner cleansing all that stuff that has outgrown its usefulness or is no longer a true part of our psychological make-up, can start to fester and pollute the inner space. Do some mindfulness exercises to gain a better understanding of where you are, where you need/want to go, and what is holding you back at this point.

The New Moon in Scorpio is also a good time to strengthen our inner resilience. That is, our ability to adapt to changing circumstances – it does not mean resistance. Resilience is strengthened when we bond together and support one another.

A couple of days ago Jupiter and Pluto joined for the final time in this current cycle. New energy is coming in and there is hope. However, these two planets together also signify a battle for power.

The fact that the New Moon sextile the conjunction lends energy for renewal to the struggle. However, it is likely to be a dirty fight.

Venus is in Libra, the sign of law and justice. The battle is not a fistfight, but more likely, a legal battle. Venus will be forming consecutive squares, first with Pluto, then with Jupiter, and finally with Saturn. It could be a wild and chaotic ride for a while, but in the end order and lawfulness should be restored.

This aspect, too, promises erratic action – or at least talk. This could be a sign of a stand-off or a walk-away. Certainly, opinions will be highly charged and excitable. Chaos sows confusion and in-fighting. At the last Uranus /Mercury opposition in October, there was certainly plenty of discord and mudslinging going on. We may very likely get more of this, but since this is the last pass, it is likely to lead to a resolution, one way or another.

This aspect constellation indicates some kind of uneasy or deceptive truce. An agreement may be made, but likely on false promises. A bad compromise that is likely to lead to conflict later. Bad faith.