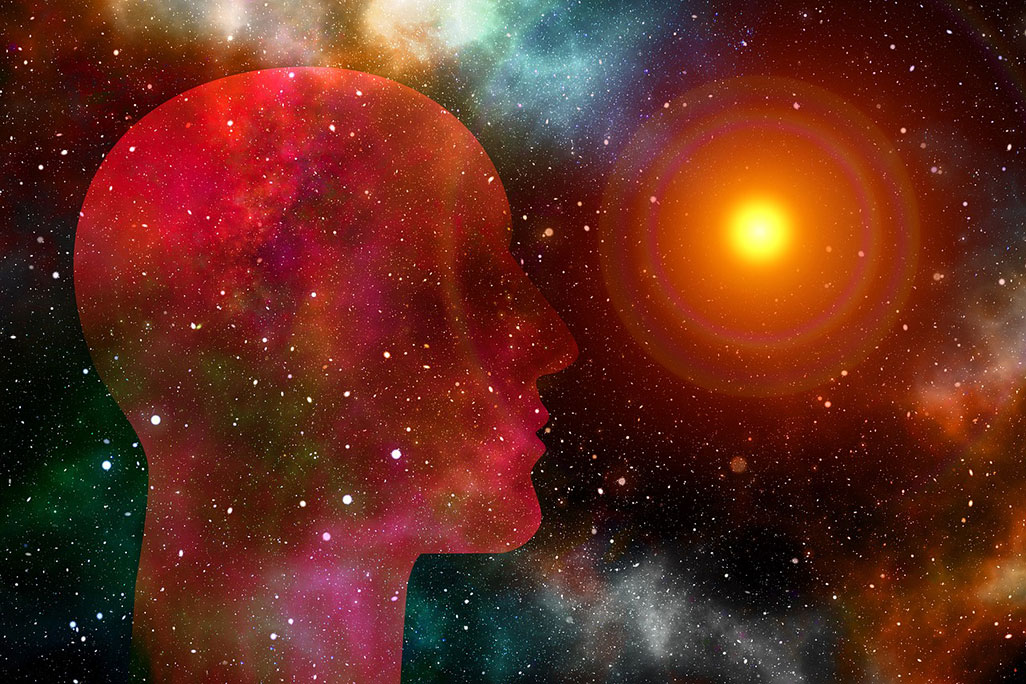 Where is the boundary between inner and outer reality? We see the world not as it is, but as the brain interprets it for us, based on our sensory experiences. The brain creates our image of the world according to its exposure to a variety of signals or stimuli. Due to this fact it is, pretty much impossible to experience anything completely fresh and unbiased. The mind automatically activates neural pathways and connects the essence of prior experiences to the present. It interprets any given situation accordingly, in an effort to somehow make sense of the experience, even while we are in the middle of experiencing it.

To some degree, this mechanisms is adaptive in terms of our evolution. Our thinking is fixed into patterns which we use to orientate ourselves and explain the world – until something comes along that does not fit into these existing patterns. At this point we have two options. Either we deny the experience or we have to reorder and expand our thinking. In order to do this we have to create new categories, and new connections based on what we already know. E.g. We encounter an animal that is neither a cat nor a dog but shares similar characteristics with both. We call it a fox and bingo, a new category is born, which however, will inherit certain known properties from the categories dog, cat, mammal, animal…etc.

This view of the world is called constructivism. We construct order and meaning by means of our mental processes, which help us to make sense of the world. But to take this construction as a ‘factual reality out there’ is to confuse the map with the territory.

Astrology can be seen as constructivist cosmology. However, its model of reality is based on psychological prototypes (archetypes) that help us to understand the structure of the psyche and make sense of inner and outer world.

In medieval astrology, this view of the world was expressed in the ‘Doctrine of signatures’. According to this model the ‘essences’ of the Gods (Planets) were expressed both in the inner and outer world. The planets are not the Gods themselves, and accordingly, they do not ‘cause’ events. Rather, they govern over their specific spheres, which every soul must pass through on its way to incarnation. Each sphere it passes through ads a ‘coat’, which is the signature of that planet’s sphere, It is the inner representation of the outer God/Planet. The soul can now understand, interpret and integrate its experiences according to these inner spheres and bring their ‘missions’ to fruition in its incarnation. No two souls could ever be the same. So, in this view, each individual IS a manifest moment of time bound on a journey through time-space, and through its lifespan is expressing the evolving essence of that moment, in step with the ever evolving cycles of time.

Likewise, all of the manifest world was regarded as an expression of one or the other (or combined) planetary essences, shaped by the signs and their elemental qualities. Everything, but everything bore the signatures of the Gods. Thus, astrology served as a kind of universal language that held the key with which the inner or cosmic meaning of our inner and outer worlds could be unlocked.

On the psychological level, for example, the ever changing world of emotions resembles the ebb and flow of the oceans, which is seen as a manifestation of the element of water, which is governed by the Moon. Thus, astrologically speaking, water is the element of the psyche, of feelings, moods, intuitions, and dreams. The sun represents the life-force, the vital power and animates our world. Without it there would be no life on earth, no energy, no vital essence that could pulse through the hearts of all creatures. In the human body the seat of the sun is the heart, and psychologically, it represents our creativity and individuality.

This way of seeing the world of course is not scientific, even though early scientists tried very hard to model it into a rigid system. Instead, it is a symbolic way of seeing that by-passes some of the communication traps of language. It allows one to grasp the ’truth’ or ‘reality’ in a non-verbal, symbolic way. It can help us to construct a world in which inner experience and outer world are linked by the same essential principles, instead of one that is governed by arbitrary forces beyond our control, and often beyond the reach of our understanding. It offers a view of the world that aligns and connects our inner experiences with the world we are born into.

Seeing the world through these astrological glasses can be described as the art of ‘making-making’. Instead of finding ourselves in an alien and possibly hostile and dangerous world, astrology connects the dots by means of underlying ‘cosmic’ principles. Because these principles are familiar and part of our own psychological reality, the outer phenomenological world can easily be grasped and understood. The sharp divisions between outer and inner world are unified.

This way of looking at the world is fundamentally different to the modern notion of ‘objective’ reality in which the observer places himself outside of the phenomenon that is being investigated. This mainstream ‘separatist’ view of the world has created dire consequences, in particular with regard to our relationship with nature. We no longer perceive our relatedness, no longer see the Gods that are present within our own souls as also present in the animals, herbs or trees, mountains or rivers. In separating ourselves conceptually from nature in this we have lost a bit of our souls. We have become blind to the interrelatedness of all existence. Astrology is the language of both the cosmos and of the soul that can help us reconnect these realms.