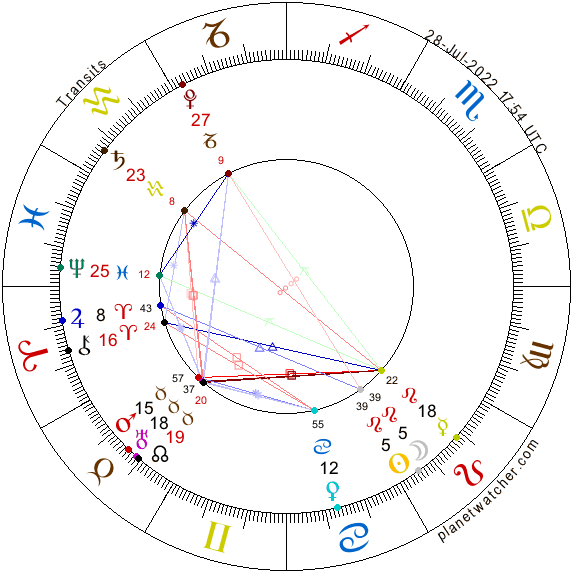 The New Moon in Leo is all about the fire of life. At this time of the year, nature yields her fruit and if the Sun and Moon are kind, we will be blessed with abundance. It is a time of carefree joie de vivre, of playfulness and extravert activity. That is the theory.

This particular New Moon in Leo is likely going to be intense. The New Moon casts a trine to Jupiter in Aries. The combination of these planets promises some pompousness. Jupiter in Aries is audacious and unabashed, while the Sun and Moon in Leo enjoy basking in the limelight of their glory. Yet, the New Moon makes no other aspects and appears to be sitting on the sidelines instead of taking centre stage.

In the personal sphere, creative endeavours are much energized and encouraged by Jupiter’s bold optimism. It is a good time to pursue your goals with all the fire and energy of this New Moon and Jupiter.

Saturn in Aquarius is rational, while Jupiter in Aries can be theatrical and dramatic. These two power-houses can drive each other up the wall. Confrontation is likely.

Mercury is also in Leo, but not conjunct with the New Moon. Instead, it is forming a T-square with the Moon’s nodes. Uranus is drawn into the pattern as it is conjunct the north node. Communication can be touchy. Unexpected circumstances or revelations can cause outrage and upheaval. Fixed signs are not known for their flexibility. Self-importance and pride can jeopardize stability.

The trine between Mercury and Chiron indicates an opportunity to address a troublesome issue, but avoid the blame game. Never waste a potential learning opportunity, even if learning from mistakes.

In Cancer, Venus is caring but also craves nurture. Self-care is important. Protect your boundaries and listen to your inner voice. ‘No’ is always an option. And remember, if the cap does not fit, don’t wear it.