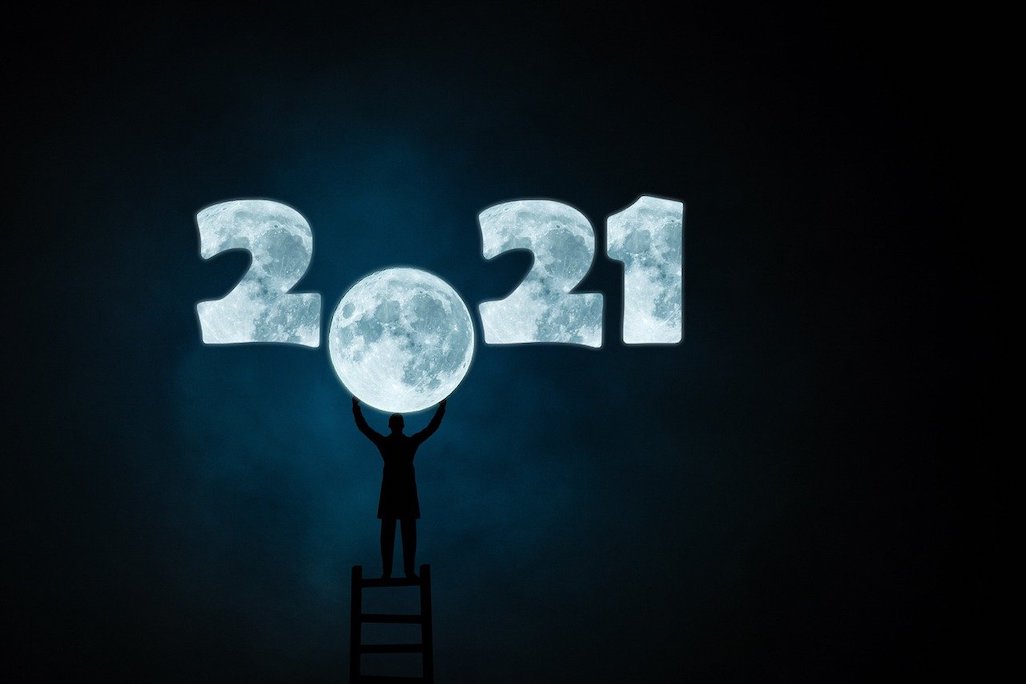 We have come to the end of what can easily be described as the strangest year of the century, so far. Okay, it is only 2020, there are another 80 years to go, but still. It’s been one hell of a year!

Last year saw the end and the new beginning of three major cycles:  Saturn/Pluto, Jupiter/Pluto, and Saturn/Jupiter. We are truly entering a new era.

But, I don’t need to recapture it here, since we have all lived through it. Instead, I want to look ahead, to 2021 and take a peek at what is to come.

So, let’s take a look at where we find ourselves at the start of 2021:

Saturn and Jupiter both changed signs and have moved into Aquarius on December 17 and 19,  respectively. They almost immediately formed a spectacular conjunction on December 21, kicking off their new cycle. This is still very much operative at the beginning of the year, especially as it will be energized by Mercury and later the Sun moving through Aquarius as well. Mercury will be in Aquarius for an unusually long time as it will be going retrograde at the end of January and not change signs until March 15, 2021.

Saturn has already briefly visited Aquarius between March and July last year. This time, he will remain in Aquarius until March 7, 2023.

Astrologers tend to view Aquarius as a sign of progress, social change, and revolution. However, it is easy to fall into the trap of associating these qualities with party politics. Astrology is not politics. The planets represent archetypal forces, which operate in all of us, and right across the full spectrum of politics. The Aquarian principles are indeed concerned with social issues, with more equality, and liberty. But that doesn’t make Aquarius (or Aquarians) liberal, per se. These attributes are not ‘owned’ by party politics as the recent lesson in ‘upside-down politics has shown us.

Political parties try to claim such labels but under the gaze of the relativistic and deconstructionist mindset of late modernity (I don’t think we have reached the postmodernist era yet, although, quite possibly, we are about to), almost any once-firm concept melts into bubble-gum. Autocrats become the champions of the disenfranchised and socialists are labeled fascists. Our black and white boxes of traditional left-wing/right-wing political thinking have become meaningless. And, totally inadequate. Instead, we really need to start thinking outside of those boxes and redefine what it means to be human in the 21st century, our relationships with each other, and with the natural world.

Covid has shown us how interrelated and inter-dependent our world has become. Global issues touch everybody. In order to solve our problems, we need to apply system thinking and understand that everything is very much interrelated with everything else. Party politics sets us apart. We need to overcome that isolationist way of thinking if we want to realize the greatest human potential: interdependence and mutuality with all life. These are aquarian principles. Let’s see how the reality of such a vision will shape up in the course of the unfolding Jupiter Saturn cycle.

Prometheus and the Quest for Fire

Aquarius is also a sign of innovation and technology. The myth of Prometheus and his quest to steal fire from the Gods in order to ‘enlighten human beings’ says a lot about the Aquarian spirit. Prometheus felt sorry for humans, exposed to the elements as they were, back in those mythical times. He thought it unfair that only the Gods had control over fire. How enlightening it would be for humanity to have access and control over this powerful element! Thus, risking his life, he went off to steal some embers from the Gods and gave this gift to humanity – which changed the course of history, and evolution for this feeble little creature that was wo/mankind.

Needless to say, the Gods were not pleased when they discovered the ‘crime’. Prometheus was punished heavily, but they could not take the use of fire away again. Learning to use fire has sparked countless innovations in the course of our development. It has been put to many great uses.

But Fire has not only brought us light and warmth but also bombs and war. We scorch the earth to plant our monocultures and our energy-driven economy literally eats our planet’s resources. Although Prometheus’ act was a humanitarian one, the consequences are a double-edged sword.

It is not the fire’s fault for having destructive properties, and it is not Prometheus’ fault for giving humanity this gift. It is our own choice as to how we handle it. Aquarian innovations must be handled responsibly.

Historically, we have taken a rather anthropocentric view of our scientific innovations. But maybe, just maybe, we are on the brink of understanding that nothing – not even human beings – lives in isolation, and nothing exists independently of nature. A truly Aquarian philosophy understands this inter-relationship and innovates with a systemic perspective in mind.

At present, such an Aquarian dream is rather utopian. Technology can always be used for good or evil. The surveillance technologies that help us to control the spread of the virus, can also be used to monitor – and control the free movement of the people. Saturn puts a spotlight on both of these aspects of Aquarius: the need for social responsibility and system thinking, as well as the dangers of social control and social engineering.

The great ruler of the Olymp is generally regarded as a ‘benevolent’ planet – which is not to say that he is free of vices!

Aquarius is a highly idealistic sign and Jupiter’s visions here are intended to improve the human condition. But always a bit full of himself and his ideas, Jupiter can be quite zealous in promoting them. He is convinced that his vision of what is good for humanity IS best for everybody. That is, for everybody but him. He himself reserves the right to be a little different. In Aquarius Jupiter can be a bit of a hypocrite.  Inevitably, not everybody shares his beliefs and ideology. The big question is, how should those who dare to think differently be dealt with? This is Jupiter’s test in this sign.

Jupiter in Aquarius will strengthen the voices for social change. This year will bring us many reforms which may, however, not go far enough. There will be battles over issues such as equality, social justice, and various humanitarian issues. Perhaps, Jupiter will inspire a much needed new vision for our future that will energize and inspire movements for change.

A push to implement more technological solutions to many of our collective problems is also highly likely.

Cryptocurrencies such as Bit-Coin may make a revolutionary breakthrough.

Uranus is currently in the fixed earth sign of Taurus. He has been in Taurus since May 15, 2018, and he will stay there until April 26, 2026 (venturing very briefly into Gemini from July 7 to September 6, 2025). Both Aquarius and Taurus are fixed signs so we will be witnessing a series of squares between Uranus (soon to be joined by Mars) and Jupiter /Saturn. In particular, these first two months of 2021 are going to be a bit of a rough ride.

The Jupiter/Uranus square on January 17, kicks in first, raising hopes and a spirit of change. This aspect, however only occurs once. The Uranus /Saturn square, on the other hand, is scheduled for three encounters throughout the year: on February 17, June 15, and on December 24. The current Uranus/Saturn cycle is in its waning phase, which can be seen as a kind of disruptive stress-test, an attempt to reconcile the demands for change with what is actually possible. Resistance to change is futile. But if we put Saturn to work these aspects can be used constructively.

If you want to find out more about Saturn, sign up for the Free Saturn Paper, which will be sent to you by email as soon as it is out of the oven ;-).

These are the main themes of the year. Of course, there are all the other ‘usual suspects’, particularly Mercury which will be going retrograde for an unusually long stint in Aquarius at the end of January. We are just at the beginning of a new era. The hopes and aspirations will be tested, as is the way of time. Our best bet is to think Aquarian and to cast the net of our ‘system perspective’ as wide as possible, while not denying our individuality and diversity.

Sign up for the latest posts to get monthly forecasts, lunar insights, and updates on all the current Astro-happenings.