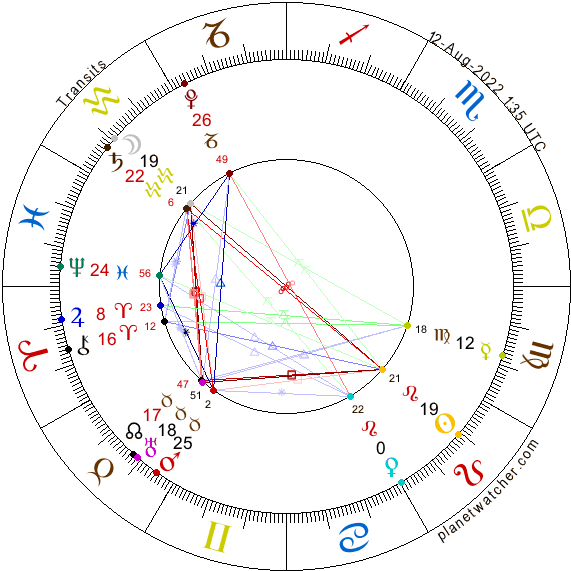 This Full Moon is full of intensity and friction, but often it is during such times that the biggest leaps of development happen. Grit, and the determination to take on challenges, propel action.

The Full Moon in Aquarius highlights the recent tensions. It seems like it seems the battle lines have hardened. The Moon conjuncts Saturn and the Full Moon axis squares Uranus and the nodes. And, as if that was not enough, Saturn squares Mars. Tensions are high, and the situation is volatile. Such seething volatility is often met with oppression to control the turbulence.

Mercury’s sesquiquadrate with Pluto activates some sore spots. In Virgo, Mercury is a forensic analyst or a nit-picking critic whose aptitude for finding fault is not always appreciated or particularly helpful. Someone is likely to get upset.

Mars and Pluto are in trine, and Neptune takes the midpoint between them. The Mars/Pluto trine suggests a workaholic and downright obsessive approach when focused on a specific goal. But Neptune seems to undermine the effort. An invisible counterproductive force appears to be at work.

Venus and Jupiter only play minor roles, casting weak or dissociated aspects to other planets in the chart. At 0 degrees Leo, Venus is just getting ready to take charge of that Leo energy. But Jupiter is retrograde, which means he is not as extrovert and assertive as he was when he first charged into Aries.

Be prepared to have your willpower tested. But if you know what you want, nothing can hold you back. Determination is the key to success. Don’t let the nay-sayers rain on your parade.