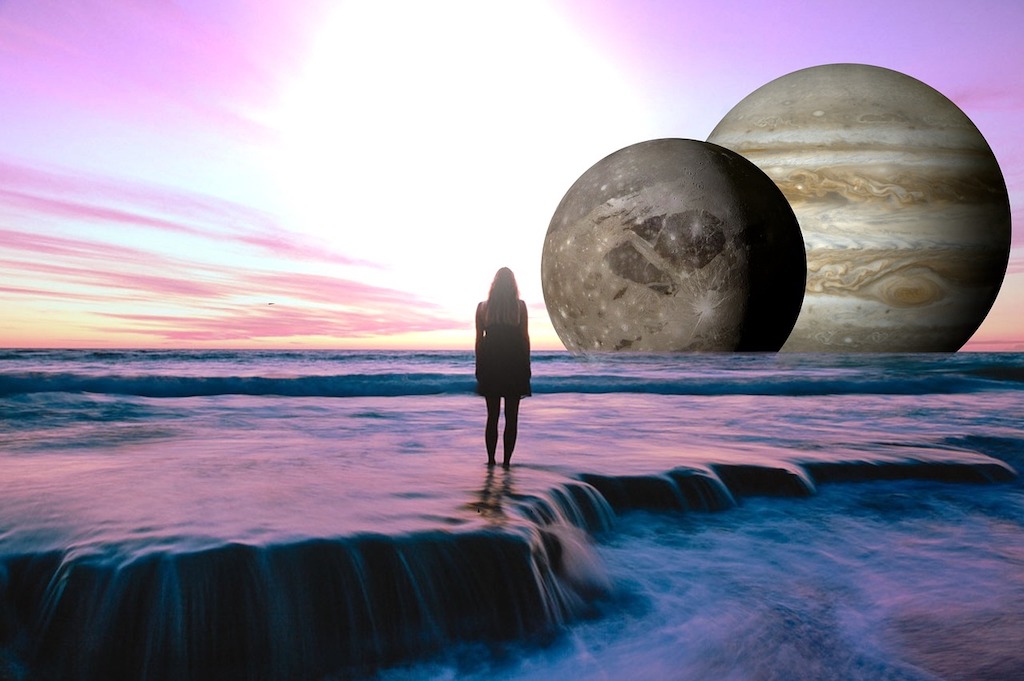 ​Jupiter conjuncts Neptune – what does that mean?

Have you been feeling the vibes?

Jupiter has been closing in on Neptune for some time now. Since April 4, they have been within a degree of each other at 22°/23° Pisces.

Sounds like a big deal, but how common is it?

Jupiter moves relatively fast, taking only about 12 years to go around the Zodiac, while Neptune takes 165 years! Their paths cross roughly every 13 years. So it is not that rare, but still a significant juncture worth examining closer.

Zeus and Poseidon in Mythology

In mythology, Zeus(Jupiter) and Poseidon (Neptune) were brothers. After Zeus dethroned Saturn and liberated his siblings, he divided the kingdoms between himself and his brothers. Hades (Pluto) was in charge of the underworld, while Poseidon (Neptune) was given the Oceans. But he was never totally happy with that allocation. To redress the balance, Neptune relentlessly crashes onto the shore, as he tries to claw back some ‘terra firma’ territory.

Neptune is a shifty character. Like the ocean, he can never be pinned down. Depending on his mood, he can appear sublime or terrifying. Neptune is not just the God of mystery and spiritual enlightenment, as some would have us believe, but also the God of earthquakes, storms and communicable diseases.

Jupiter is generally regarded as the great benefactor: generous, just and optimistic, but his shadow side is greed and bigotry.

Historically, the Jupiter/Neptune conjunction has coincided with some important treaties that intended to unify the people and establish peace. WWII ended on a Neptune/Jupiter conjunction, and when the two last met in Pisces in 1856, it signalled the end of the Crimean war.

The power of the imagination

Both planets signify idealism and hope, and that is a good thing. We need Neptune’s imagination and Jupiter’s optimism to fuel our enthusiasm for great and worthy causes. Believing in something greater than ourselves revitalises our lives with meaning. But, we should not be so naive to believe that the pie in the sky is actually edible. Ideals are real in the realm of the imagination. When we try to bring them down to earth, they transform and inevitably lose some of their shine.

Humans will be humans. We are always torn between the poles of selflessness and opportunism.

If we want a better world, we must hang on to the beliefs, ideals and dreams that convince us that a better world is possible; that we can overcome greed and bigotry. Those visions motivate us to try – and every little act of kindness makes the world a better place.

This Jupiter/Neptune conjunction takes place in Pisces, the most spiritual sign of the Zodiac. That same duality is also mirrored by its symbol of the two fishes that swim off in different directions. We can but try to overcome that dichotomy and humbly accept our humanity.