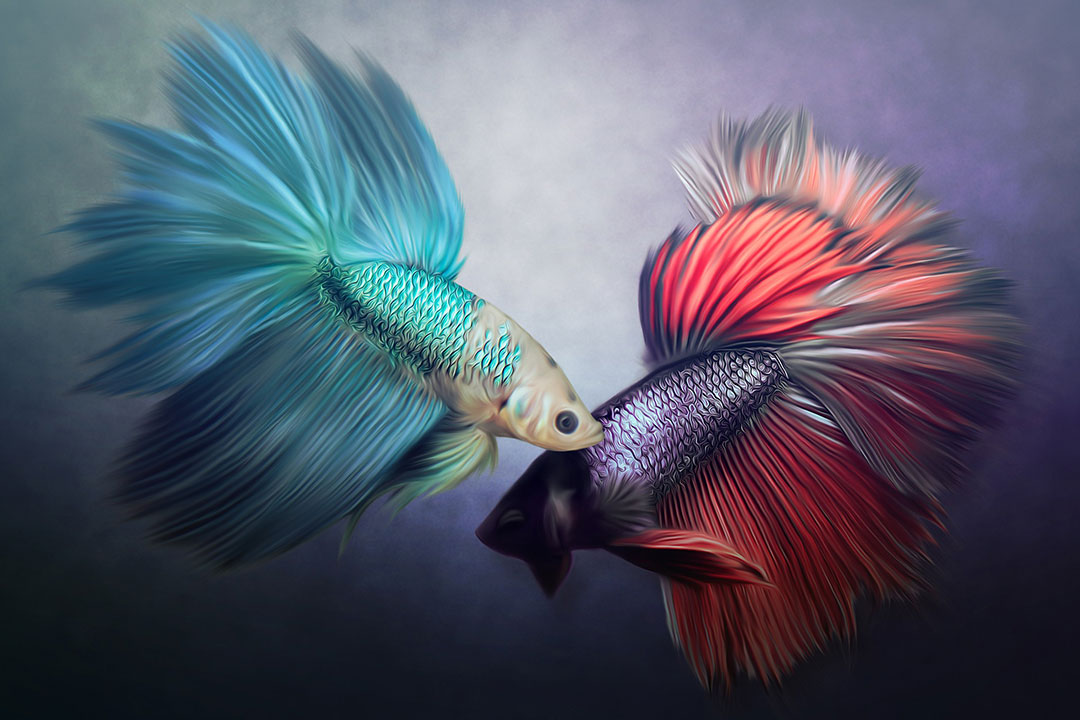 Pisces is symbolized as two fishes joined by a rod or string, yet they swim in opposite directions. It is the last sign of the natural zodiac and perhaps the most complex.
When the Sun has reached Pisces, the path of individuation has come full circle. As the solar hero cycles through the zodiac, they learn the lessons of each sign. They discover what it means to have an e.g, realize their roots, and explore the world through the eyes of ‘the other’.
The final three signs teach us about serving the community.

Pisces can be pretty slippery. It hates to be pinned down, defined or pigeonholed. Its chameleon-like quality can adapt so effortlessly to almost any situation that Pisces seems to be in constant inner motion.

Let’s investigate the Piscean mythology to see if it can shed light on this contradictory and sometimes confusing sign.

The Pisces myth is a dramatic story – about the battle of good and evil and who should rule the world.
Greek mythology tells us about the Olympians, who had usurped the Titans long ago. Under the reign of Zeus, they lived a jolly life. But the Titans were less satisfied. They were jealous and not at all amused at having been disposed of. So, one day, they rebelled, and the hideous Titan Typhon launched an attack on Olympus. Robert Graves describes the monster graphically:

“From the thighs downward he was nothing but coiled serpents, and his arms which, when he spread them out, reached a hundred leagues in either direction, had countless serpents’ heads instead of hands. His brutish ass-head touched the stars, his vast wings denied the sun, fire last from his eyes, and flaming rocks hurtled from his mouth.”

Clearly, this was not a creature to be trifled with.

Pisces to the rescue!

Panic-stricken, the Olympians transformed themselves into various animals and fled the scene. Only Aphrodite and Eros were caught unaware. When Typhon happened upon them, they jumped into the sea. As if by magic, two fishes appeared and helped them to escape. This is how the fishes gained their place of honour among the stars.
But, the fishes disagreed and swam off in opposite directions. But Aphrodite joined their tails with a cord to avoid losing touch with Eros.

Psychologically, Pisces often finds itself torn between the two poles of existence, light and dark. As one fish probes the depth, where all that is abject and rejected is discarded, the other reaches for the cosmic spheres. Pisces feels the weight of human suffering as if it was their personal cross to bear. No other sign can understand the tragic-comic paradox of life as deep as Pisces.

The challenge for this dual sign is not to attach itself to only one of the fishes while denying the other. Pisces must learn to integrate both light and shadow to keep the full spectrum of the human experience in perspective. When they accomplish this task, they will have attained true wisdom.