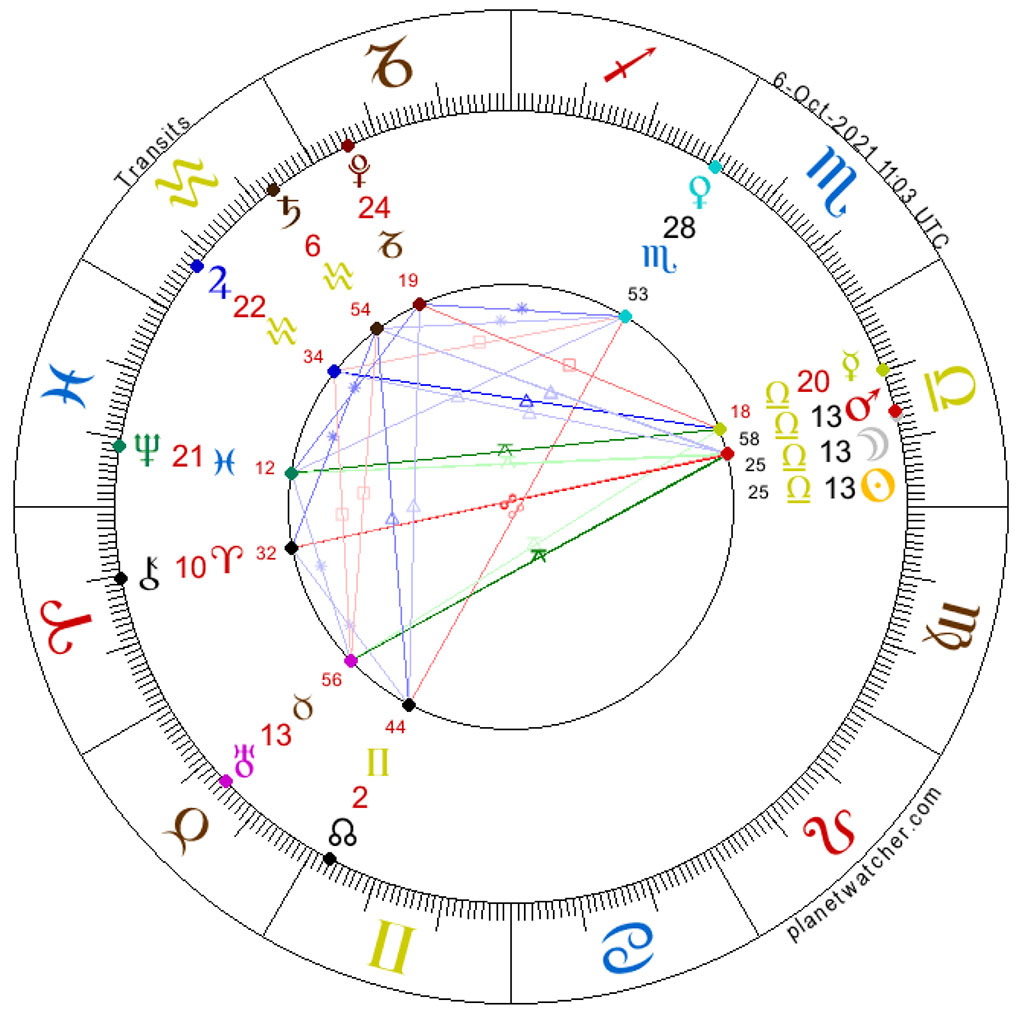 The New Moon in Libra reminds us that we are at a turning point. By the time Libra has come around, the annual cycle of the Sun has reached a point of balance. As the motion continues, we will soon be facing the dark.

Pluto has been retrograde since April 27, 2021 and is turning direct on this New Moon. We will see what kinds of ‘gifts’ from the underworld he will bestow on us. But there is always something that is pushing itself into our consciousness when Pluto returns to the scene.

A new cycle begins, even though we do not see its shape yet. We get an instinctive inkling, some fleeting ideas, idealized visions of what might be. Libra is a sign of justice and of social and moral law. These topics are very much in focus at this time, as we will see.

The New Moon is very closely conjunct Mars, the warrior planet. Mars in Libra fights for justice and equality, but that does not mean he is unbiased. Mars fights hard for his beliefs, and in Libra, simply assumes the moral high ground. Here, he is the champion of the epic struggle between good and evil. But, the real world is a lot more complex. With this constellation, the ideal outcome should be a win-win. But that is rarely possible without compromise. How far can we bend and still be true to our ideals and sense of moral justice? And that, in a nutshell, is the dilemma that Mars in Libra must face.

The problem is that it is not just this triple conjunction that is producing all the hot air, but the aspects they are forming: an opposition with Chiron and a quincunx to Uranus, while Mercury, also in Libra, quincunxes Neptune.

Health issues are still on the table. But in this constellation, the focus is on equality and health justice. Covid policies are dividing the social world, both within countries and across the globe. There are a lot of debates and battles over issues such as booster jabs, vaccination certificates, vaccines for youngsters and so on.

The quincunxes between Mars and the Sun and Moon to Uranus highlight a dilemma. We want something different, but please don’t change anything! Uranus can really rattle the Libra cage with his stubborn, obstinate attitude.

The other quincunx does not involve the Sun, Moon and Mars. It is between Mercury, which is also in Libra, and Neptune in Pisces, both retrograde. Sometimes, Neptune brings revelations during his retrograde phase, while Mercury might probe and question. But the two together can also obscure the issues even as new details emerge. Despite Libra’s notorious black and white perception, nothing is clear-cut on this New Moon.

The most positive aspect of the chart is the trine between Mercury and Jupiter, even though both planets are retrograde. The trine signifies an opportunity for reflection to examine inner values. It is time to ask the crucial question – what kind of world do we want to live in?