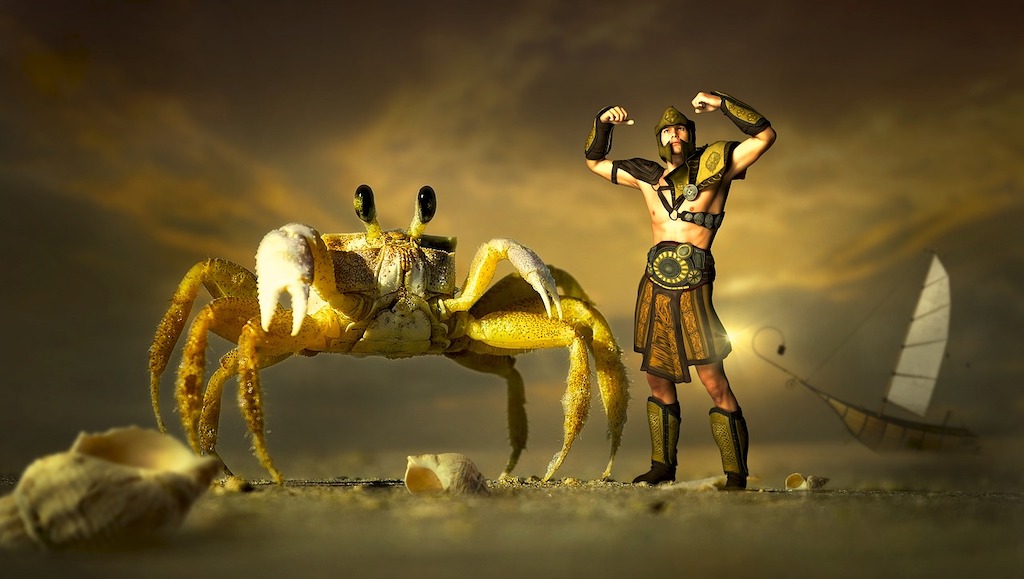 When Mars transits Cancer we are in for an emotional time. The warrior-god Mars is not terribly comfortable in the sign of the crab. Mars acts on instinct in this sign. Forget rationality. In Cancer, Mars prefers to trust his feelings and intuitions. But when something ‘feels right, he plunges right in.

That may or may not be a wise thing to do but don’t you dare to criticize him. He can be extremely touchy and is likely to steamroll anyone daring to question his decisions.

In Cancer, Mars can feel a bit insecure which he compensates for by over-reacting. He may feel that he has to prove himself and is looking for approval. Or he can get defensive and weaponise sulking by making others feel guilty for treating him wrong.

On the positive side, Mars in Cancer can empathise with others and if touched deeply, he does not hold back. He commits to action on an emotional level. However, this can be dangerous ground if his chosen cause is based on nostalgia or nationalism in the political arena. No matter how hard he fights, he will never bring back yesteryear.

Mars in Cancer is the king of his castle and very house proud at that. This transit is a great opportunity to tackle a domestic project and let Mars do the heavy lifting. In the domestic sphere, he is especially ambitious.

A Mars transit through a Cancer first house can augur an emotional time. Mars might feel on the defensive side and bristle up without any real cause, except his oversensitivity. It’s like, the inner child is asking for attention and making all kinds of demands. Show it some love, but don’t give in to every whim.

When Mars passes through the second house, be careful with your spending. Mars in Cancer is impulsive and likely to make emotionally based money decisions. That is usually not a good thing.

When Mars visits the third house, interactions can feel a bit tense. Don’t assume that someone close to you deliberately tries to hurt your feelings or step on your toes. They probably didn’t even notice.

If you have been planning on doing some home improvement job, don’t hesitate. Get it done, now. The only pitfall might be that someone else in the household doesn’t approve, in which case, try not to take it too personally.

With Mars in the fifth house, the time is right for getting into a full creative swing – especially around the house and garden, or with the kids. But be careful when showing off your work. Mars in Cancer does not take criticism well.

In the sixth house, Mars is a workaholic. Unfortunately, this can overtax his resources, especially when trying to look after others. The demands may become too much, in which case the stress can easily turn into health problems.

A Mars transits in the house of relationships can be a touchy time, especially in Cancer. In this sign, Mars idealizes love. But of course, nobody is perfect and he may end up feeling hurt or disappointed. But withdrawal or emotional manipulation is not likely to make things better.

In the eighth house, Mars is most likely to show his vulnerable, intimate side. But be careful who you trust. Mars is very sensitive here and some people may not handle your feelings with the appropriate care.

When Mars transits through the ninth house, he gets restless as adventure beckons. But Cancer is a home-buddy and needs its creature comforts. While that does not stop Mars from travelling, he probably opts for a camper-van, so he can take his home along, or rent a holiday flat that provides all the comforts he is used to.

A Cancer tenth house is not a happy place for Mars. He tends to be very self-conscious about his status and esteem. But as he tries to prove himself he is likely to punch above his weight. And, falling short of his goals is likely to be a bruising experience.

In the eleventh house, Mars in Cancer takes on the role of a champion for the underdogs. His pride rests on doing a worthy deed and being needed. And others should appreciate it – else, he might get huffy or even spiteful.

When Mars transits through the twelfth house, his energy is best applied to serving a greater cause, taking care of or protecting others. Directed internally, Mars can fall into a moody-broody episode and feeling sorry for himself.