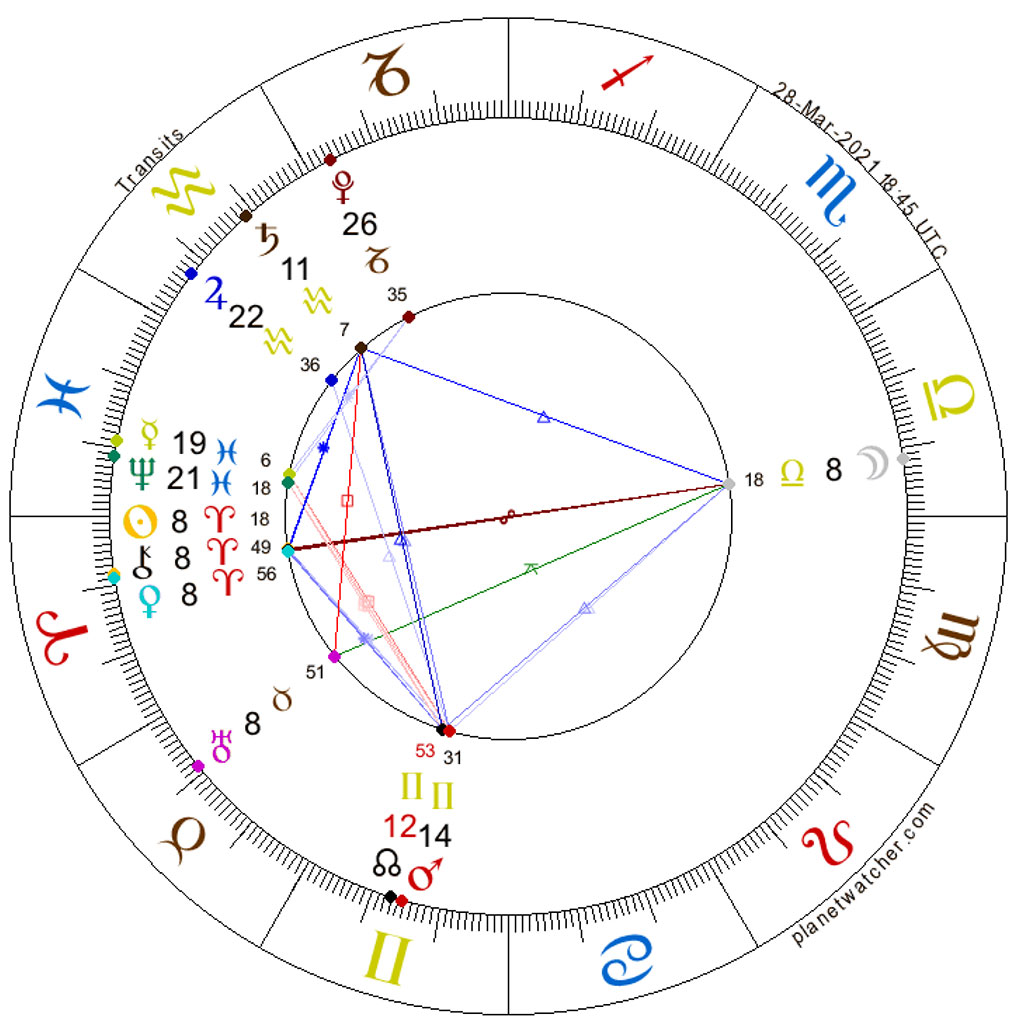 The Libra Full Moon focuses on the conflict between the will of the ‘I’ and the demands of the social sphere. The willful, action-orientated, impulsive, and competitive energy of the Aries Sun contrasts with the socially-orientated, consensus-driven Libra Moon. Within the social sphere, one’s impulses and actions (self-expression) are validated (or not) in the eyes of ‘the other’, The social frame of reference approves, or disapproves, acknowledges self-expression or demands that the ‘I’ conform with social norms.

The shape of the chart, featuring a beautiful kite right across the chart, very much captures the symmetric beauty of this symbolism. There is just one little quirk that upsets this balance – the quincunx between the Moon and Uranus. Let’s take a closer look.

The Full Moon axis is a bit off-kilter: Chiron and Venus are so closely conjunct the Sun in Aries that they all occupy the same degree. All last year, Chiron featured prominently at key points during the pandemic – and almost always while forming a semi-sextile with Uranus. That is also the case in this Full Moon chart.

This combination of Sun and Venus shows a strong pleasure-seeking impulse. It is certainly understandable that after a year of lockdowns and social distancing everybody is craving for connection, love, and attention Who doesn’t want to just forget the virus for a little bit and have some fun? But Chiron in the mix serves as a reminder that we do so at our own risk while risking the health and welfare of others as well. The Moon in Libra demands a rational, just, and balanced perspective, but with the bulk of the planetary weight coming down in Aries, the Moon is rather outweighed.

A ‘Kite’ is a special aspect pattern. It comprises a grand trine, and two sextiles between two of the planets of the Grand Trine and a fourth apex planet (in this case 3 apex planets). The Moon in Libra, Saturn in Aquarius, and Mars (and North Node) in Gemini form the Grand Trine in Air signs. These planets are socially orientated and intellectually motivated. However, a Grand Trine tends to be rather self-content. It is the apex planet(s) that act as the catalyst(s) and infuses the pattern with dynamic energy. This pattern brings into focus the debate between the camp of ‘personal freedom at all cost’ vs. ‘social responsibility at all cost’.

Mercury, charging through Pisces, closes in on Neptune. This combination can be rather dreamy, fanciful, imaginative, or it may signify wishful thinking. Negatively expressed it can be deluded, or deceitful, and peddle in conspiracy theories.

Mercury forms a square with Mars, which suggests a rather confrontational and uncooperative style of communication. This square feeds into the kite pattern and stimulates (heats?) the debate.

Mars also conjuncts the North Node, highlighting the necessity to find a compromise and to work collectively towards a common goal. Whether that is achievable is questionable given the square to Mercury and the emphasis on Aries in the chart. (The North Node and Neptune are only barely dragged into the square to Mercury, but they do resonate with it.)

Another challenge that also feeds into the kite pattern, albeit less directly, is the separating square between Saturn (Aquarius) and Uranus (Taurus). Together, these two planets are the creators of the biggest drama of the year. They will keep us on our toes. There is an implicit rebelliousness in this planetary combination. Historically, this aspect pattern is often associated with a struggle for freedom in the face of political oppression. There are plenty of examples where this is playing out, right now. But, the tension between these two planets is weakening, right now, as Saturn is moving away. However, the aspect is still active on this full moon and feeds into the main pattern of the chart.

Uranus demand for freedom and independence fuels the Aries-end of the Full Moon polarity. It supplies this already determined cluster of planets with an extra dose of defiance.

Uranus also ties into the main aspect pattern of the chart: it forms a quincunx with the Moon. Quincunxes are a bit awkward. The two planets involved don’t share any common ground in terms of their elements or polarity. Yet, both ends of this stick have to be satisfied if a workable solution is to be achieved. Yet, quincunx solutions tend to be compromises that are far from ideal. In this case, at least both Taurus and Libra belong to Venus – one of the apex planets of the kite. Whether a compromise can be found very much depends on her. Venus in Aries is no push-over. But she would still sooner come to a peaceful agreement than having to go into an all-out battle.

These are minor aspects, and weak ones at that. All of these planets are slow-moving and not involved in the major action of the chart. The sextile between Pluto and Neptune suggests an underlying sense of apathy and fatigue. But Jupiter, who sits in the middle, between Pluto and Neptune, offers a glimmer of hope that a better world (or some version of ‘normality’) may be possible if we orientate ourselves around the principles of responsibility and solidarity.