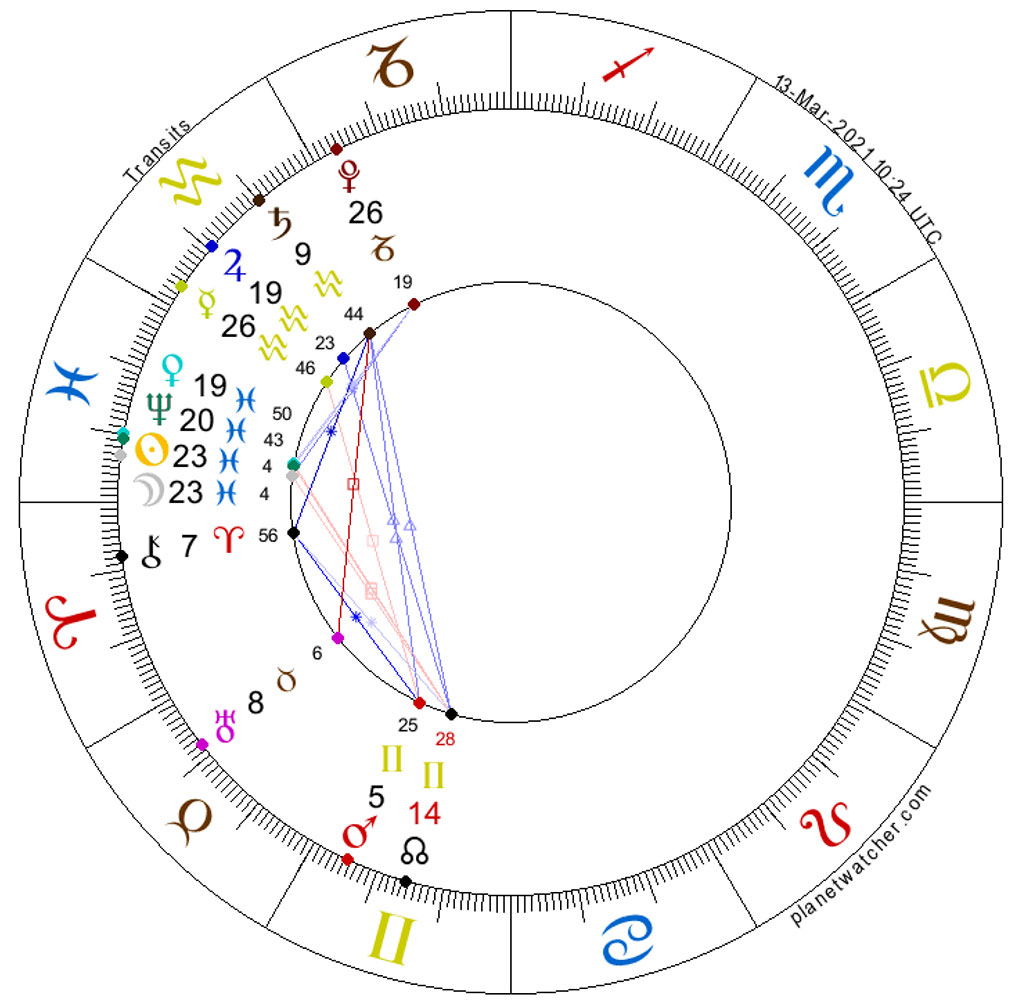 The New Moon in Pisces signals the breaking of the waters, the thawing of the ice and snow, the softening of the earth at a time when she is getting ready to give birth to a new growing cycle. The first flowers appear, the tree buds are swelling, and a hue of green is beginning to cover the naked earth.

This is a time of germination. The seedlings, deep in the earth, are breaking their shells and giving up their perfect wholeness (Virgo), and in doing so, their potential is released. They have embarked on a journey of becoming. In the dark, the little rootlets find their way, probing the depth, absorbing the nutrients of the soil, while at the other end, the shoot searches for the light. Like the two fishes of Pisces swimming in opposite directions, they remain bound together.

This New Moon in Pisces serves up a whole bucket load of fishiness. With not just the Sun and Moon in this changeable, watery sign, but also Neptune and Venus – and they are all conjunct! Depending on which fish you are floating with, this can be a moody, drifting, diving down the deep end, and emotionally unsettling New Moon, or it can be full of unicorns, awe, and inspiration.

Mercury, Jupiter and Saturn in Aquarius

Offsetting this fishy affair is a similar congregation in Aquarius. But the big difference here is, Saturn, Jupiter and Mercury are not conjunct. Aquarius is quite a different kettle of fish (pun intended), and it adds a bit of complexity to this otherwise fairly one-sided chart. That means, the flavours of these planets are a bit more distinct and they are making aspects to other parts of the chart (see below). These planets are all about channelling ideas from the conceptual level into the manifest world. Idealistic Jupiter dreams big, Mercury comes up with a cunning plan, and Saturn applies the necessary discipline to make it real. Sounds great, doesn’t it? Unfortunately, it’s not quite as straight forward as that.

It could all be so groovy if it wasn’t for that pesky Saturn/Uranus square that is accompanying us through the year. Right now, it is separating, but still well within orb (=still in close contact). What that means is that the tensions between the poles of discipline and order at one end, and the call for liberty and freedom at the other, are still high. It is likely to remain high for a while, as Saturn and Uranus remain locked in this square aspect with very little wriggle room until the twain will exact the square again (June 14). This aspect provides the background vibe for the year and there are plenty of examples for it, especially (but not only) on the Covid battleground.

This combination of planetary influences is actually a very benevolent, altruistic kind of configuration. Here is an issue that requires both, emotional intelligence and real empathy, as well as the greatness of vision and idealism to bring about real change. The vision is certainly tangible, but given the Uranus/Saturn square, it will be a continuous battle to bring it through into reality. An idealistic project takes a whole lot of effort and commitment, and Venus and Neptune in Pisces don’t exactly inspire much of that – although they may fantasize about how marvellous such a utopian world would be.

Pluto in Capricorn has been churning and eroding social institutions ever since it moved into Capricorn. Mercury, casting a semi-sextile from the more liberal and progressively-minded Aquarius, brings a whiff of real reform into stale old structures. It’s a shame the transit does not last long, as Mercury moves so quickly. Still, if there is some old habit that has outlived its usefulness, this aspect offers a short-lived opportunity to implement change.

It may not immediately strike the eye of the casual observer, but Chiron is at the midpoint between Mars, and Saturn. This is a challenging configuration with a focus on health issues. Chiron has been prominent in the lunar charts throughout this pandemic. Sitting here, at the midpoint between the great ‘malefics’ suggests that we are not quite over the hill yet. The danger lurks in being too rash, due to the growing impatience, and desire to get out and about and to be social. With any luck, discipline will keep the worst at bay.

The Bottomline: Make the most of this manifest-your-dreams-energy but stay focused and avoid getting side-tracked. And, stay safe, even though it is tempting to throw caution to the wind as soon as it is possible to do so, that wouldn’t be a good idea right now. We are not out of the woods just yet. Hang in there, and make plans for the future. Things will get better again. It is just a matter of time.