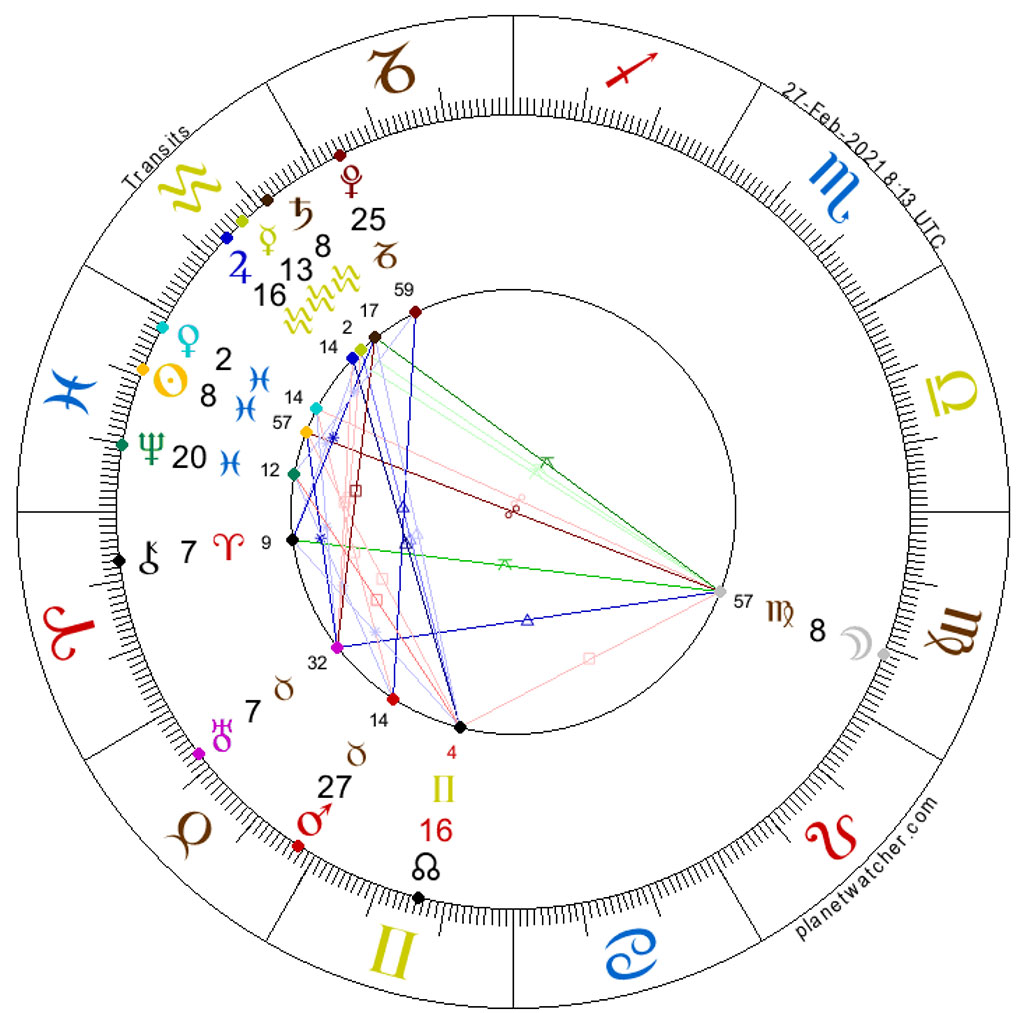 The Full Moon in the sign of Virgo opposes the Sun in Pisces, which is joined by Venus. It seems to pick up on the ambivalence of longing for togetherness, for emotional closeness and connection vs. the cautionary principle, and the sense of unease that lingers despite the fact that many countries are beginning to look for ways to end the endless lockdown.

The Moon in Virgo is quite sensible.  Sees the world in a pragmatic and stoic way, while looking for practical solutions. To be able to ‘re-open’ the public sphere, a detailed plan must be in place. But how to plan anything with so much uncertainty (Sun in Pisces)? That is the challenge of the quincunx between Saturn and the Moon. Saturn is also a practical fellow, but in Aquarius, he insists that the principles of freedom and liberty must be respected.

The other arm of this double quincunx is held down by Chiron in Aries, which has often been a focal point during this pandemic. The truth is, despite the vaccines, and our yearning for life to return to normal, as well as the bare-bones economic necessity to reopen – we can’t plead or reason with a virus. We are still under attack and the attacker is fierce and unpredictable.

Uranus and Saturn are locked into a square pattern all year. Their first exact contact was on February 17, and they are now slowly separating, but still within one degree of the exact square. The energy is still volatile. At present, reform-minded unrest is particularly prevalent in Myanmar and in Russia. Both of these countries have significant transit connections to the current Uranus/Saturn square.

The moon’s trine to Uranus in Taurus emboldens the rebellious side of the conflict – it is winning the popularity contest. However, Uranus remains locked into the square with Saturn. More oppression by the authorities is to be expected.

Saturn, Mercury and Jupiter are forming a stellium in Aquarius, although Jupiter and Saturn are only tenuously linked by Mercury. The emphasis on Aquarius indicates a preponderance with the rule of principles.

Mercury has just turned direct again, which is likely to ease communications and make things run a bit more smoothly for a while.  This triplet of planets is a signature of scientific inquiry (Mercury) framed by the challenge (Saturn) and hope (Jupiter) for the relief and advances that it will bestow on humanity.

The trine between Mars and Pluto is separating. This aspect carries undertones that are reminiscent of the Uranus/Saturn square. However, this is a trine and it reminds us that there is another way. We can change and transform. We don’t need to hang on to the way things have always been! Even though change means letting go of some aspect of the past – but that could be a good thing! It all depends on which way we will steer the chariot.

What is striking about this Full Moon chart is that all the planets are on one side of the zodiac, pretty much confined within 122 degrees, between Pluto and Mars, with only the Moon taking a wider perspective. It may be worth pondering the virtues of common sense and doing the necessary. Chop wood & carry water.