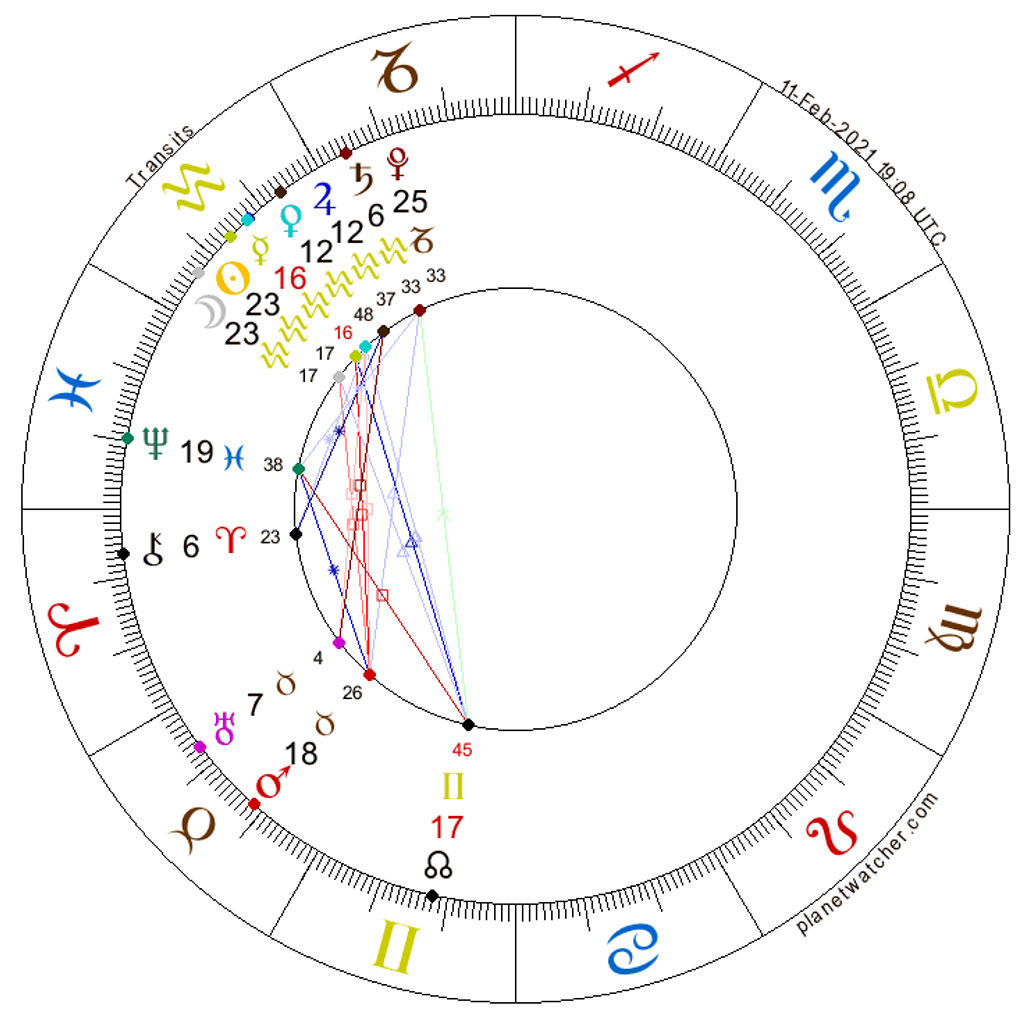 The New Moon in Aquarius is a veritable Aquarian Bonanza! The Sun and Moon are joined by four other planets: Mercury, which is retrograding through Aquarius, Venus, Jupiter, and Saturn. Quite a party!

Sun, Moon at 23° in Aquarius, semi-sextile Pluto in Capricorn

The actual New Moon isn’t making very tight aspects on the day. The closest they muster is a semi-sextile to Pluto. There is a kind of power play going on. Don’t be surprised to see some surreptitious moves to hide or deny the facts.

Mercury is retrograding through Aquarius and trining the north node. It is a time to reckon with the past.  Anything that has not been dealt with properly will push itself into the forefront, forcing us to acknowledge and deal with it. Nevertheless, Mercury retrograde can be evasive and Aquarius has a way of rationalizing even the most unreasonable propositions, while Gemini can either make light of grave matters or present ‘alternate views’ as reality.

The strongest and most beautiful aspect of the New Moon chart is the exact conjunction between Jupiter and Venus. This is a powerful combination. Venus is not just a pretty face but also stands for justice and truth. In combination with Jupiter that sends a powerful message that the principles of justice and truth do in fact mean something. It could also be a very ‘fortuitous’ aspect for those who are directly affected by it.

It could also relate to celebrity gossip – did I miss something?

Chiron casts an almost exact sextile to Saturn. It looks like health is in focus, but this time, getting a dose of responsibility treatment by means of the Saturnine influence. It is a collective effort and together we can fight for it, even if it does curtail the freedom of individuals.

Not everybody is in agreement with restrictions – whether they are health-related or imposed by the authorities in order to preserve the social order and maintain control in the face of popular uprisings. This Saturn Uranus square has been building since the beginning of the year and it will continue through the rest of the year – we can be sure that social unrest will be a feature of 2021.

The Mars Neptune sextile is separating, but still active. It is a bit of an ambivalent aspect. It has an air of ideological fervor. Neptune signifies disinformation, deception as well as religious belief systems. A lot of wars are fought over things that nobody can prove or disprove; things that only exist in our hearts and minds.

The square between Mars and Mercury – still retrograde – only raises the tension. This can be quite a battle of wills, of cunning, of guile, and of brazen bullheadedness.

If you have a planet at 12° Aquarius or nearby – make the most of it! Venus and Jupiter are shining on you and this is your moment to seize. The rest of us can still enjoy the breezy wind of change that is raging in Aquarius right now. But be careful not to let spurious claims and cult-like ideas cloud the mind. If there are things to attend to pertaining to the past – now is the time to see to them.