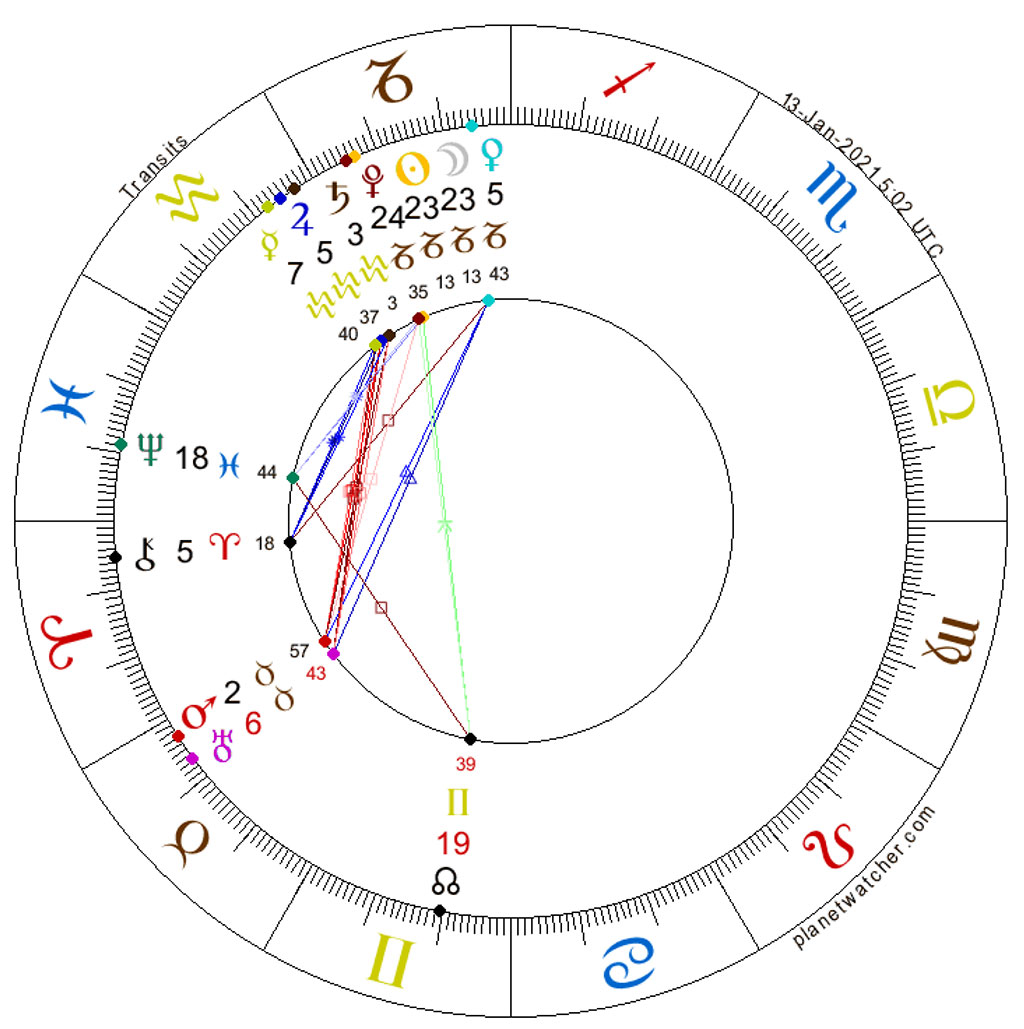 The New Moon in Capricorn is especially ‘piquant’ this year. Capricorn is generally a steadfast and dutiful sign. But this New Moon is in very close conjunction with Pluto, the Lord of the Underworld. Pluto likes to shake things up. But unlike Uranus, who creates sudden dramas and rebellious upheaval, Pluto is associated with extremism, fascism, totalitarianism, and, in New Age speak, with ‘transformation’.

Pluto was discovered in 1930, as fascism was rising in Europe, and only 3 years before the Nazis came to power in Germany. At the time, Pluto was in Cancer, a sign in which it expressed itself as thinly disguised propaganda messages twisting home/family sentiments into emotional manipulation and nationalistic rhetoric of the ‘blood and soil’ type.

Pluto is now in Capricorn, the sign that is opposite to Cancer. Capricorn is the sign of the body polity, of statecraft, political institutions, of duty to one’s country. Again, we see a fanatical agenda that abuses the concept of patriotism for its own political ends.

I also mentioned ‘transformation’. Let me remind you of the nature of Pluto’s transformational power: Pluto stands for the Underworld, the realm of the dead. Its brand of transformation is often quite violent, and purgative – especially in as far as it relates to events in the outer world. It brings out the shadow and shows us the deep, dark bottomless abyss that is always nearby and into which we can easily fall at any time. In terms of public life, that means the ruthless, lawless, violent, frenzied bloodthirsty, and mindless mental state that can infect a human being triggered in the right way.

Once allowed out in the open, such outbreaks of frenzy are hard to contain and to calm down. In one fell swoop, thousands of years of becoming civilized, and sophisticated human beings, who are capable of the most amazing feats of art and culture, can be annihilated. Civilized behaviour is a fragile cultural treasure that depends on all of us to adhere and to safeguard a common type of respectful, law abiding conduct. It is not the law that ultimately safeguards this cultural treasure but the people who adhere to it its code. This code consists of a set of values, which represent our moral choices – because as human beings we have do have a choice. Pluto forces us to look into that abyss and to make a choice.

Prerequisite to dealing with the shadow is that we must first recognize and acknowledge it. Only then will we be able to reset the inner moral compass. So, the New Moon highlighting Pluto in this way is a big deal. It marks a new beginning, by asking us to face the shadow. It may also signify further traumatic events.

These squares and conjunctions indicate a great deal of tension and there is a great potential for violence. (Nobody needs astrology to see this coming, but astrology mirrors the events that we are witnessing.) They also symbolize an ongoing power struggle between those who wish to reform the fabric of our society and those who are rebelling or using shocking means to cling to the power that they consider ‘belongs’ to them – Taurus is a possessive sign! While currently all eyes are on the US, this is not the only place where these patterns are likely to turn into events. The current transits also trigger important points in various other countries’ horoscopes. (e.g. Uganda, USA, Hong Kong, Iran – and others.)

How it will work out in the end depends on how those in authority will handle their end of the stick. Reforms and renewal are urgently needed. But how far should they go? How should perpetrators be treated?. There are conflicting views as to how to respond to a political crisis, whether to call for unity and forgiveness or whether to bring those responsible to justice, and by what means. A comprehensible, reliable ethical code of conduct is needed. Integrity, in other words These are the kinds of issues that are in focus on this New Moon.

Interestingly, the midpoint between Mars and Saturn falls exactly on Neptune, of all planets. This focuses on the conflict and points squarely at misinformation and lies that are at the bottom of it all. It also signifies the undermining, insidious nature, wearying effect of Neptune and the falsehoods and conspiracy theories that are peddled under his cover.

Neptune, among other things, also signifies ‘infectious diseases’. Covid-19 is still rampant and is spreading ever further due to equally rampant lies, denial, and conspiracy theories – which happen to be very neptunian ways of processing information.