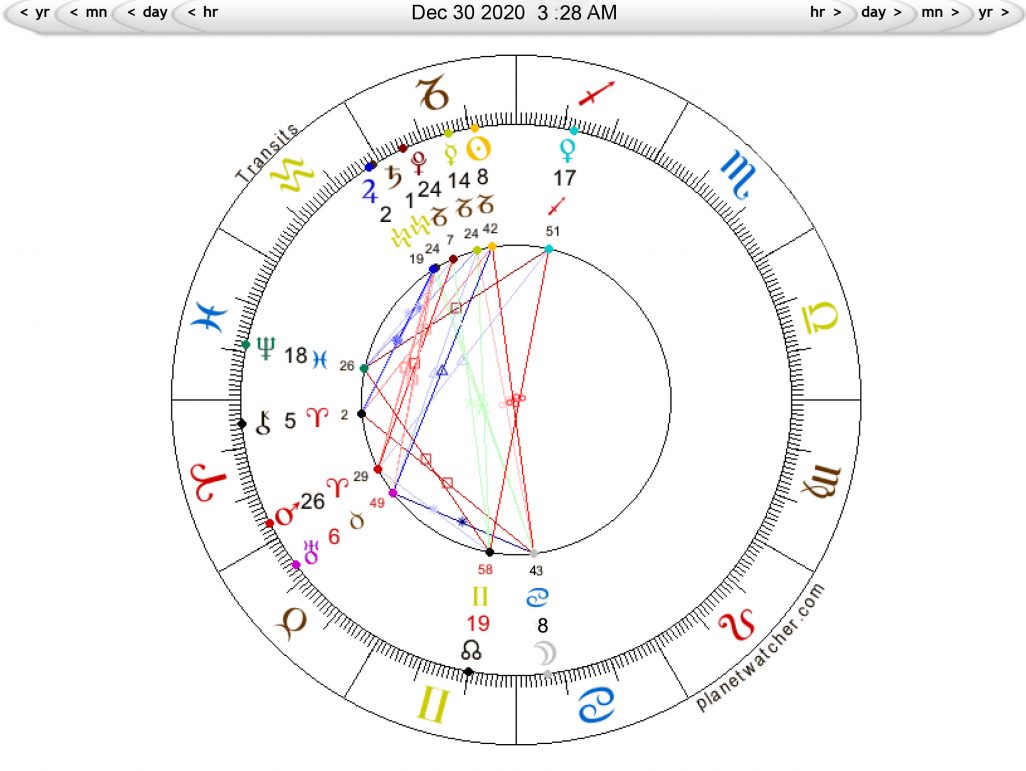 The Full Moon in Cancer brings this crazy year to a close, just one day before New Year’s Eve. The Sun in Capricorn is pragmatic and down to earth. The emphasis is on social obligations, duty, and ritual. The Moon in Cancer signifies the realm of the family.  Mercury has recently overtaken the Sun but is still near-by. In Capricorn, Mercury is pragmatic and strategic. The combination is quite risk-averse, calculating, and strategic, always keeping the ulterior goal in mind

The Full Moon also squares Chiron, ‘the wounded healer’. Once again, at a time when infection rates are sky-rocketing the Full Moon highlights health issues. It depicts the inner conflict between the social duty of acting responsibly and the emotional desire to be with family and friends. Sometimes to care means not to get too close, as difficult as that is, for all of us.

Venus, the planet of relationships is conjunct the South Node, which denotes old baggage, karma, things that bind us to previous patterns of behavior and relating. In Sagittarius, Venus is highly spirited and fancy-free. Being conjunct the South Node means it is also opposite the North Node, the point that indicates future aspirations or goals, things that must be developed. This point is in Gemini. It is a relational sign. The two points are squared by Neptune, which indicates that the flow of energy from one point to the other is interrupted by Neptunian disillusion and disappointment. Misunderstandings, lies, and deceit or simply a distorted view of reality lie at the root of disappointment. A display of false feelings adds insult to injury.

Uranus, the planet of sudden, unexpected change, disruption, and rebellion is forming a trine to the Sun, and sextile to the Moon. Since trines and sextiles are aspects that ‘flow easily’, there is no real shock associated with this aspect. Nevertheless, there is a change and a sense of urgency bound up with the desire for freedom and independence. At this point in time, Uranus is still retrograde, so the future looks anything but certain. This is a signature of defiance rather than rebellion. There is a sense of change hurtling down the hill come hell or high water. It is following its own dynamics without encountering resistance.

On December 21, the world witnessed a spectacle that has not been seen at this close range in 400 years: the Saturn/Jupiter conjunction! Even those who could not watch it because of adverse weather conditions were, for the first time in history, able to watch it online. It was quite something. Even now, Saturn and Jupiter can be observed close to each other in the south-western evening sky.

The significance of this conjunction is complex. You can read about it here in more detail.

In terms of the dynamics of this Full Moon chart, as an ‘oracle of the moment’, it is not massively significant since neither of these two planets forms a close aspect to anything else in the chart. However, it is a signature of the times and signifies the beginning of a new cycle. The principles of Saturn and Jupiter coming together is an image of a vision becoming reality. More precisely, it is the moment of ‘birth’, at the outset of the process of materialization. Aquarius is an idealistic sign that embraces independence, technological novelty, and the digital world. But crucial the question concerns the underlying ethics – on which principles do we build the future? Or put another way, what kind of world do we want to live in, in the years to come? In time, Saturn will test our vision. The process of materialization always demands compromises. No vision, however noble survives this process intact. How well will the manifest reality live up to the original ideal? Only time will tell.

Potentially the most troublesome aspect of the Full Moon horoscope is the Mars/Pluto square, although Mars is already separating from Pluto. This kind of aspect certainly signifies a very disturbing, ruthless, and potentially violent energy. A few days earlier, when the two planets were closer, there were quite violent volcanic eruptions at Mt. Aetna in Sicily and a strong earthquake in Croatia. The intensity of the square is now waning, but another one is forming as Mars is about to enter Taurus from where he will form squares to Saturn and Jupiter and soon conjunct Uranus. It certainly looks like there is more in the pipeline.

At the dawn of a new era, we have to come to terms with loss and disappointment before we can move on. Change is inevitable, and the road ahead is not at all certain – what is certain is that it will be a bumpy ride. Taking care of ourselves also protects the ones we love. Prudent and pragmatic planning can mitigate uncertain times ahead.