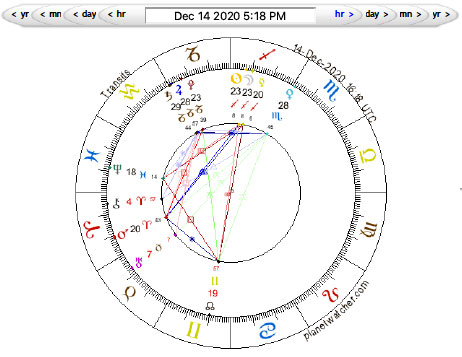 On this New Moon, there is also a total solar eclipse, which, however, will only be visible in Chile and Argentina, in South America. But its effects will likely be felt far beyond the range of visibility.

Eclipses often get a bad reputation. This is likely to be due to the fact that the sun appears to be swallowed up by some shadow being. The Sun, our life-giving force! But modern astrologers tend to take a more psychological view. It is time to shed a skin, a time for renewal!

However, transformation doesn’t always come in the shape of a piece of cake. Yes, a new dawn is rising. But something dear and familiar may be fading away. That loss must be acknowledged. Grieving is an important part of processing change.

This is rather pertinent under the current political circumstances. It is a moment for regrouping, for shedding the old skin, but also to be mindful of the vulnerability of this new skin that is emerging.

It is a good moment to contemplate the future and the past and to accept the fact that the wheel is turning. The future is uncertain, but irrevocably moving forward.

There is no turning back. And the fact that the eclipse New Moon is happening in Sagittarius encourages us to be optimistic. We may or may not reach our goal, but it is better to aim high and miss than never to shoot your arrow at all. That is the ‘happy-go-lucky’ Sagittarius attitude, at any rate.

And quite often, it works, at least to some extent.

This configuration shows the ambiguity of seeking contact and connection among like-minded people, yet not being able to come to an agreement, and ultimately experiencing a disappointment. The values don’t match, or there is simply no will for a win-win outcome. The connection is severed

It’s complicated. This aspect mirrors the one described above. There is a deep and karmic connection, but there is a conflict of interest. The two sides are pulling in different directions. The only way forward is to let go.

All that fire of Mercury, Sun, and Moon in Sagittarius trining Mars in Aries certainly is well capable of delivering a fiery and passionate speech. Whether it can uphold its promise and deliver is an entirely different matter. At this point, it is too early to tell.

Jupiter and Saturn are moving ever closer together, getting ready for their ‘fusion event’ also known as the ‘great conjunction’,  on December 21, when they will join forces to bring in the beginning of a new era. Venus in Scorpio in this mix, however, indicates the sting in the tail and perhaps a wee bit of vengefulness before the current chapter is truly closed.

A new dawn is about to break. Although the future is uncertain, hope provides a guiding light.

Disappointment may still linger, but it is best to let go of the pain. It is time to face reality and to move on.