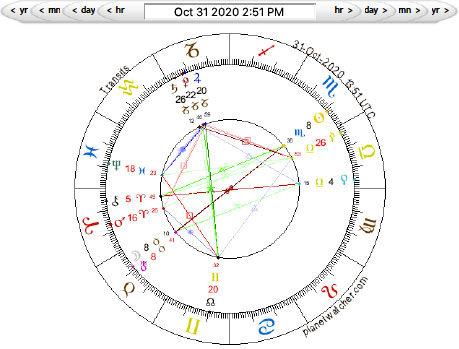 This Full Moon comes, quite appropriately, at Halloween! It is a time when the veil is thin and the passage between our everyday reality and ‘the other world’ of the spirits becomes quite permeable. It is also a ‘blue moon’, which means that it is the second full moon in a calendar month.

The most striking aspect of this full moon horoscope is the fact that the full moon occurs exactly conjunct Uranus. This promises to bring some unexpected turmoil. Since this is happening in Taurus, which is an Earth sign, and the overall emphasis of the planetary distribution is in earth signs, the matter is likely to be a physically tangible one. However, the planets involved are not casting aspects to other planets in the horoscope, so it may be an event that is not directly related to other issues that have caused a lot of upheaval during this last year. Chances are it stirs emotions over the issue of safety and security.

Mercury is still retrograde and it has recently (October 28) re-entered Libra. The last time it was in this degree (26°) on September 24, 2020, it was exactly opposite Mars, which highlighted a lot of protests, aggression, and defiance, in all quarters and corners of the globe. We may revisit some of those issues, only this time Mercury is square Saturn, which has a different flavor. Saturn is the reality principle and it is likely to demonstrate the consequences of things that were said and done during the earlier transit phase. But now, Mercury is about to turn direct (Nov. 3) and in less than a week he will be crossing this very degree again, this time in direct motion. Whatever confusion was sown earlier is likely to get cleared up in early November, as reality hits.

This constellation is a bit awkward. It suggests some kind of pact or agreement, but the motivation is not in good faith. Instead, there is a flavor of deceit, of looking out only for one’s own benefit and the accompanying sense of disappointment that such partnership will inevitably bring. It is more of a connection that suggests a ‘necessary evil’ than actual affinity. There may be delusional hopes and expectations associated with the outcome of the connection.

Venus the Goddess of love passes through Libra, a sign that signifies friendship, balance, and justice. Opposite Chiron, in Aries, she reminds us that we can overcome our collective wound if we show more solidarity and caring. But we can’t win if everybody just looks out for themselves.

In personal Astrology, the earth signs Capricorn, Taurus,  and the cardinal signs Capricorn, Cancer, Libra and Aries are most affected by the energies of this full moon. Of course, early-born Scorpios may also ‘feel the vibes’. If letting go in a dramatic and abrupt way is your style, then this is the moment for maximum impact. But be aware of the consequences, once the dust has settled.  Negotiating agreements can hard and tedious and ultimately may not be satisfying if there is no genuine will to make things work for both sides.