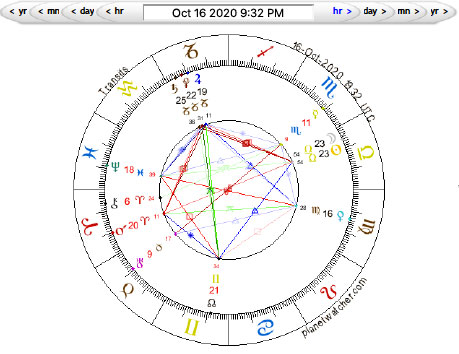 This New Moon has plenty of surprises in store. It comes just two days after Mercury has gone retrograde. This is its last retrograde period in 2020. But it will give us plenty to chew on.

Mercury retrograde usually augurs a time of chaos and confusion, especially in the realms of administration, paperwork, and communication. In Scorpio, Mercury is a Pokerface with an agenda and a seething passion.

On this New Moon, retrograde Mercury opposes retrograde Uranus, which is likely to add an erratic, unpredictable, and possibly explosive edge. Negotiations may not just end up in the sand, but with the sand being thrashed around for emphasis. Under mounting tensions, someone is likely to flip their lid and walk off the stage. Chaos mongering.

T-square: Sun/Moon in Libra, opposite Mars in Aries, square Jupiter/Pluto in Capricorn

Although Libra is associated with balance and harmony, this New Moon is anything but. The fact that it forms a stressful T-square with Jupiter and Pluto at the apex in Capricorn and Mars opposite the Sun/Moon conjunction, means that there will be plenty of tension. It is more likely that it will highlight the imbalances and tensions that need to be overcome in order to achieve balance. However, which way things will go, is not certain.

Jupiter conjunct Pluto has a bit of a megalomaniac quality to it, and the square to Mars and the New Moon adds a sinister edge. The tension has to come out somewhere. It could be resolved in court or, just as likely, in open and possibly even violent conflict.

The New moon is also trining the North Node, which also sextiles Mars and quincunxes Pluto. There is an opening that would allow a compromise, but ego- or power interests are probably going to interfere. Decisive action is necessary. Mars in Aries may deliver it, but given his usually pretty blunt style, he may offend just about everybody in the process.

These constellations appear to be soft and perhaps offer a way out. But given the opposition between Venus and Neptune, such hopes and touted idealism seem to be delusional and not grounded in reality. You can hype anything. The reality of it is another matter and will be judged by the results. Still, there is plenty of hype flying about, and some will buy it, only to be disappointed later.

This kind of aspect pattern could also indicate the revelation of some scandalous news.

This New Moon features the setting for the showdown of multiple crises that have been building up throughout the year. It is likely not going to be nice but could have some real surprises in store. Whether this will help or hinder actual progress, in the long run, remains to be seen. Expect petulance and explosive tempers.

In terms of personal astrology, the cardinal signs of Aries, Cancer, Libra, and Capricorn are likely to feel the brunt of the planetary line up on a personal level. This too could manifest in combative ways, especially when dealing with authority figures or ‘the system’. Fixed signs (Taurus, Scorpio, Aquarius, Leo) might be more affected by the Uranus/Mercury opposition. Watch your words – you can’t take them back. The Venus, Neptune Jupiter configuration is most likely to affect the mutable signs (Gemini, Virgo, Pisces, Sagittarius). If something sounds too good to be true, it probably is. It is easy to get carried away on the wings of infatuation, flattery, and make-belief.