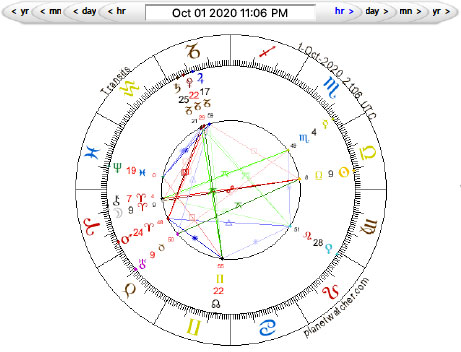 What does the Full Moon in Aries have in store for us?

This Full Moon in Aries feels rather tense and deadlocked, despite the Aries energy. The Moon conjuncts Chiron, which suggests a battle. The focus is on the issue of health, which is becoming increasingly politicized. The Moon in Aries is championing its cause. Demands for individual freedom are growing louder. The Libra Sun is trying to find a position that is fair and just, but the Moon/Chiron conjunction is voicing collective grievances and demands action. This would be less contentious if it weren’t for the awkward aspects to Uranus, which throw additional sparks.

The pandemic has been dominating the news since the beginning of the year, but in this chart, health issues are highlighted. People are growing increasingly impatient and demand their individual rights be honored. Governments are trying to make adjustments that are protecting the interests of society as a whole. But this argument is hard to maintain when people’s livelihoods are at stake as resources are running dry. Basic security has to be on offer, else people will not be willing to comply, even if they are putting their own lives at risk.

The other major league players in this Full Moon chart are Mars, which squares Pluto and Saturn. This has ‘big conflict’ written all over it. Saturn has recently gone direct and has changed gear, moving away from Mars. But the square to Pluto will get closer as we move through the month. This is an all or nothing sort of battle and it is hard to see how it can be resolved, except via the North Node, which forms a quincunx with Pluto and a sextile to Mars. However, a solution with that kind of signature looks highly ambiguous and is likely a be insincere. It does not suggest firm footing for what follows.

Neptune is forming a sextile with Jupiter and Pluto. It is also squaring the North Node, although that aspect is quite wide.  This is likely to spread up more misinformation and distrust, eroding established norms.

Sabers are rattling and the beasts are foaming at the mouth. To keep things in perspective avoid getting scooped up by passion and avoid impulsive actions. Reflection is your best ally for making rational decisions. However, don’t put off decision making indefinitely. Inaction is also an action, but may not result in the desired consequences. Choose wisely.