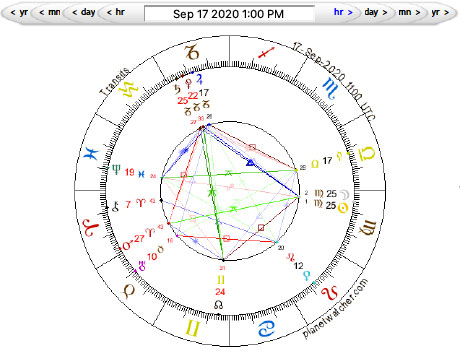 This New Moon in Virgo is highly complex with multiple jarring, disparate energy patterns. Virgo signifies health. This is certainly a major topic on the agenda, given that holidays are over and we are now reaping the harvest of earlier actions or inactions. Corona cases are already reaching alarming levels again in some of the holiday hotspots and now are dispersed back into the countries of origin of the holidaymakers. The trine between the New Moon and Saturn suggests sensible regulations, but the quincunx between Saturn and the North Node and the square between the New Moon and the North Node suggests that any sensible measures are difficult to implement for the sake of the common good. People are fearing more for their financial futures than for their health. Many countries are ruling out a second lockdown. So, we will just have to fend for ourselves and regulate our own behavior if we want to stay safe.

Saturn is still retrograde and squaring Mars, which is also retrograde. This is a highly dangerous situation. The tension between activism and authority is high, but because both planets are retrograde, it does not result in decisive action. Saber rattling, threats, aggression in gesture rather than action, are on the agenda. This adds fuel to the fire, intensifying animosities and distrust. Backtracking, side-stepping, back-stabbing are the kinds of diplomatic efforts that can be expected under these conditions. Saturn keeps the breaks on and demands patience and commitment to dealing with the necessities of the here and now. Long-term plans can’t be pushed through in a hurry. Time is better spent dealing with organizing structural changes and the details of the specific tasks in hand, than on grand slam attention-grabbing actions.

In terms of personal affairs, this is not an ideal time to push forward or act impulsively. Instead, prepare the groundwork for what lies ahead. Practice patience and prepare.

Mercury’s square to Jupiter is a symbol of the rule of law. In contrast to Mars and Saturn, Jupiter and Mercury are both direct, which suggests that they are holding the upper hand. However, both are also in aspect to Neptune in Pisces, which is retrograde. Neptune has an eroding effect. It is dissolving clear boundaries. Here we have a moral dilemma, which often arises when justice is perverted or the abuse of power rests upon the defense of its judicial enablers.

In terms of personal affairs, the dilemma is one of cognitive dissonance. We have to make a moral choice and decide where we stand and whether we are willing to take a stand for our beliefs, even if it requires a sacrifice.

These two planets in square suggest strong emotions and possible upheaval that is difficult to contain.

Bottom line: the planetary energies are building up as we are heading for a crossroads of our social and moral destiny. We each play a part in how the future will shape up.