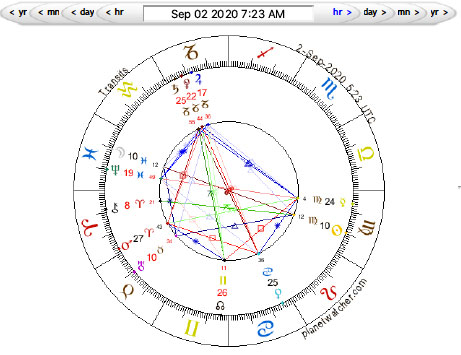 This Full Moon is full of conflicting messages and impulses.  The Full Moon opposition itself is defused by Uranus in Taurus, which receives a trine from the Sun and a sextile from the Moon.  It seems to suggest a push for liberty: throw caution to the wind. (Don’t!)

This is mirrored by Venus opposite Saturn, with Saturn trine Mercury and Venus sextile Mercury. The release of this pattern is Mercury. To diffuse a tense situation or deal with an emotional problem it might be helpful to use Virgo’s analytical skills. Instead of criticism and nit-picking, try and look at the situation from a meta-perspective. Things often look clearer with a bit of distance. From this position, you will better understand the dynamics and find a solution. With Saturn in Capricorn, the pressure of work, commitment, and duty is likely to be killing the romance and fails to fulfill emotional needs.

This is a bristly pattern for relationships that are ‘on the rocks’. There is a sense of emotional distance and coldness, coupled with the pain of passion. In more mundane terms, elements of pride, fighting for a cause against restrictions, and neglect make for an explosive and belligerent mix.

Unfortunately, Mars only makes one diffusing aspect, a sextile to the North Node in Gemini, which in turn casts a quincunx to Saturn and a square to Mercury. This is not easy to resolve. Any which way you turn the stick, there is a yes, but…

Focusing on the diffusing planets, Saturn/Pluto for the Mercury/Neptune opposition, and Uranus for the Sun/Moon opposition, might yield the best results, although they might still bring an unexpected, perhaps abrupt result.