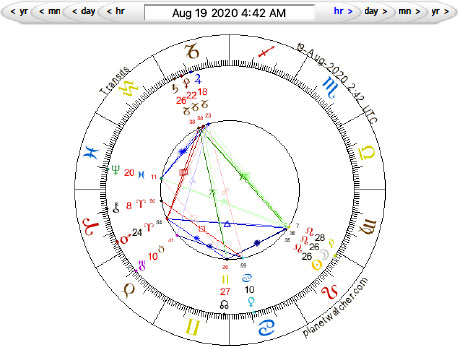 This New Moon takes place at the tail-end of Leo and it is joined by Mercury. This is a great trio for having some serious fun – if it wasn’t for all the other, more awkward placements.

The most glaring of these awkward aspects is a Yod, formed by a quincunx between the New Moon and Saturn, which forms the apex. The North Node in Gemini forms the other leg of that pattern.

The Yod aspect, also known as the finger of God, has a fated quality. This pattern reflects the atmosphere of unease – wanting to enjoy ourselves, hanging out together, and being, focused mostly on our individual needs and desires. Yet, the quincunxes to Saturn issue a stark warning. We are being cautioned to behave responsibly, for the sake of the social good.

Social distancing restrictions are still in place, but many of us are sick and tired of them, and some just don’t care about any possible danger to themselves, or for that matter, to others. This is awkward and disturbing. While it is understandable that people are fed-up after months of restrictions, simply ignoring the dangers doesn’t make them go away. Non-conformity does not just spell trouble with the law but puts us and others at risk.

This Yod is a constellation that tests our social responsibility and serves as a warning. The virus does not care whether you think it is unfair, or even refuse to believe in its existence. We create our own Karma at our own peril, as the consequences of our actions come to fruition.

The North Node is also the apex point of a trine between Mars and the New Moon/Mercury conjunction. Meanwhile, Mars in Aries also squares Pluto and Saturn in Capricorn. This energy adds a bit of feistiness to the Leo-trio (as if it needed it) and challenges the voices that call for more restraint and responsibility.

This Mars energy skews the energy pattern a bit toward the belligerent side. Scapegoating and attacks are likely. As people grow fed up and desperate about having their freedom curtailed, they become more likely to blame and attack those that appeal for caution and restraint.

This is an ongoing pattern and the sextile is not tight. It suggests an ongoing search for a new paradigm, a new ethical framework that will help us find a way out of the current dilemmas and into our as yet precarious and uncertain future. However, the currents that feed the re-envisioning of our future are fed by many different currents. There are those who promote a more authoritarian rule, and there are those who see the future as more inclusive, based on ethics and law.

Uranus has just gone retrograde, which may throw us a curveball, which may be expressed by the voice(s) of a charismatic but independently minded woman (or women). On a more domestic level, it could just manifest as a pleasant surprise.