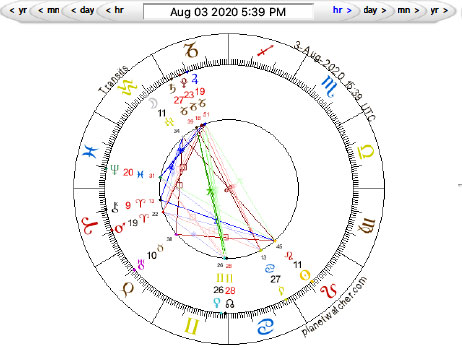 This Full Moon has plenty of sizzle, even though it takes place in the aloof sign of Aquarius. The Sun and Moon are forming a pretty tight square to Uranus, which might go off in any direction. But with the Sun/Moon axis in Leo/Aquarius, the theme is likely to bring into focus the conflict between the interests of the individual vs those of society. Emotional needs are pitted against rules and regulations. Under current circumstances, there is plenty of fuel to stoke such conflicts. The square to Uranus throws a curveball, but, this being Uranus one never knows what is coming. Whatever it will be, it is likely to send a shockwave.

Diligence is the name of the game. Mercury and Saturn are hard at work trying to make plans. The dispute is over pragmatic vs. emotional considerations. There is a sense of longing for times past.  But Pluto is drawn into this pattern, too. Although the aspect is not very tight, Pluto casts a shadow on Jupiter and Saturn and intensifies both planets. Someone is being held to account and there is a demand that responsibility must be taken. But as Saturn is going retrograde the end of the matter is not yet decided.

The Mars/Jupiter combination tends to be a highly ambitious and ‘driven’ aspect, especially in the cardinal signs of Aries and Capricorn. It is just rearing to go! But the aspects to Neptune are a bit deflating. On a personal level, this could raise questions of meaning. Nevertheless, the show may be put on anyway, just to try and convince everyone that there is something going on.

Quincunxes are always awkward. Venus is putting on a diplomatic veneer – which may be two-faced. Promises and commitments may later be betrayed or undermined. It may be wise to suspend belief for the time being. Intentions may be good, but words are cheap.