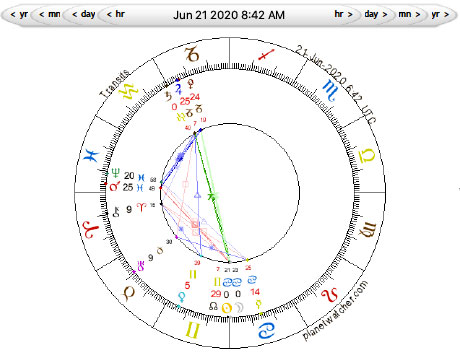 Almost the minute Sun moves into Cancer it joins the Moon, coming together at the Solstice and forming an (annual) eclipse – that is a pretty powerful astrological statement for things coming to a head. Despite the fact that there are so many planets in retrograde motion, there is the seed of an important shift, which eventually could become seismic. But don’t expect that shift to manifest right away. I am talking about the seed potential for systemic change, but not about instant transformation. Picture the yin/yang symbol at the moment of cresting. It will take time for the shift to take place.

The Sun and Moon are joining forces right at 0° Cancer. The North Node is 29° Gemini and Saturn is at 0° Aquarius. This is a pretty tight constellation, but the quincunx aspect is well known for its inherent awkwardness. Things just don’t gel. We are trying to mix incompatible elements. We need to respond to the challenges of our time with adaptability and well-structured, clear thinking. Yet, the pattern suggests an emotionally based response, especially given the fact that Mercury is also in Cancer. Cancer makes assessments based on gut response. The trouble is, gut responses are generally rooted in the most basic fear-driven limbic system conditioning. Even if we know better we tend to jump at the red flag and produce an automatic, unreflected response. It is a habit and when a situation is emotionally charged, as this will likely be (or become) such response patterns land us in trouble.

Mercury going retrograde can be a drag – things just don’t go as planned. However, during this particular Mercury retrograde period it is best not to focus so much on the outer world with all its confusions. Instead, focus on inner values and what kind of world we want to live in. We can’t change the whole world but we can change ourselves and that is what we are called to do. It is time to review and to let go of bad habits and old baggage. It is time to re-evaluate your ties. Have you outgrown them? Do they hinder or help you? Do they support you in manifesting the best version of yourself that you can be? And what can you do to help and support those you care about?

The peak of the Mars/Neptune conjunction has passed – we have been awash in a wave of protests which in turn has raised fears for another wave of new infections. But this was just the beginning. And, like a tsunami, the full impact is yet to roll in. In this constellation, the change in energy is also apparent. Expansive, optimistic Jupiter seems willing to go for broke. There is a double edge sword here – hope and optimism for a transformed future vs expansion of total power and control. But, those who abuse their power will have to deal with the consequences, which could be their downfall.

Retrograde Jupiter is sliding ever closer to Pluto, for the second pass of this transit. They will conjunct on June 30th, and at this point it will become more apparent which way the cookie is going to crumble – true leadership and a renewal of social structures, or full-on plutocracy?

Venus in Gemini blows either hot or cold. In trine to Saturn, she is likely to take a more detached stance, rationalizing emotional issues, and seeking to apply reason, even where there is none. This can feel frustrating and fail to yield results. This aspect is characterized by duplicity. The response may well be distrust. Obviously, it is not possible to create a solid, honest relationship or conduct open negotiations, or partnership discussions under such circumstances.

These two planets are holding their semisextile tight. This is an ongoing pattern which is disruptive, but more noticeable as constant background noise than as a single event. It denotes the struggles of coming to terms with a changing sense of identity and values. Swamped by change it is sometimes hard to adapt old patterns and to redefine that sense of identity.

Economic hardship also tends to throw us into turmoil, and not just politically. Those who base their identity on what they HAVE, in concrete, material values, may need to reconsider what it means to be human and alive in the 21 century. The turmoil we can observe is very much about our values on which we base our identity.

Those who are directly affected by personal contacts to natal planetary positions are likely to feel it most acutely in their personal lives as well.