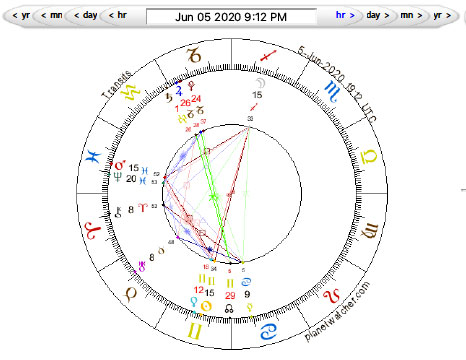 The penumbral eclipse on June 5, 2020, sets the table for the developments that are unfolding in the stars this month. It is going to be quite a ride!

This Sagittarius Full Moon is a bit of a tinder-box. The Sagittarius Moon is pretty volatile and quick to blow small things out of all proportions. The Sun is conjunct retrograde Venus, and both oppose the Moon and square Mars (and Neptune). Mars so close to Neptune in the imaginative Pisces indicates a highly emotional situation, perhaps a misunderstanding and a resulting real or imagined threat. Anger can easily get out of control. It may erupt in a tidal wave, or it may implode into seething wrath.
This planetary constellation also describes the invisible threat of infection. Just because the rules are being relaxed does not mean the danger has been banished.

These difficult minor aspects to Saturn imply a certain irritation and irksomeness as our idea of how things should be, do not meet acceptance from others. An uncompromising pursuit of goals may clash with the views those upon whom we try to impose them. Resistance can become quite vehement and widespread.
The Sun/Saturn aspect underlines the same theme, only in a more forceful manner. If we feel that our authority is under threat, an overreaction can throw a curveball to those around us, and set us up for a chaotic fall-out and further conflict. Irrational behavior alienates our allies.

Mercury in Cancer sextile Uranus, square Chiron
Mercury in Cancer is not very good at expressing itself clearly. He beats around the bush and employs all kinds of avoidance schemes. Or, he withdraws and refuses to explain why he acts that way – figure it out yourself. Emotional blackmail is a common phenomenon. The square to Chiron implies a wounded ego at the root of the issue, while the sextile to Uranus suggests that a temper-tantrum comes easier than a mature eye to eye conversation.

The north node has entered Gemini and is casting a quincunx to Saturn (dissociate), who is hovering in the 1st degree of Aquarius but slowly sliding backward into Capricorn. Social distancing rules are being relaxed and there is hope that social gatherings will become more normalized. However, even though we CAN gather again does not mean that it is safe to do so. Caution and responsibility for ourselves and others are what will keep us safe. Unrealistic expectations concerning things getting back to what they used to be, will be disappointed.

As the month progresses, Jupiter will inch ever closer to Pluto. The two planets are getting into position for their second conjunction, which will take place on June 30th. However, the entire year is under its influence. Jupiter/Pluto signifies a power battle. A delusional sense of power or need for control can produce a heavy-handed, totalitarian approach to resistance while itself resisting change. This can have serious consequences down the road and can ultimately lead to ruin, and a loss of authority and esteem.
In the personal sphere, we are asked to examen our core values. Empowerment comes from the alignment of vision and action.

On the geopolitical level, the picture is a bit darker. We are faced with totalitarian expansionism. As a society, we have to decide on our core values concerning the social order and our political allegiances.
But more about that at the end of the month, when I will publish a separate post solely dedicated to this configuration.