This Super Full Moon in Libra focuses on the axis of individualism vs co-operation, or, simpler said, me vs us. (Aries/Libra)

The Moon in Libra forms a quincunx with Neptune, an apt description of the current situation. We are asked to set our personal desires and wishes aside for the greater good of all. Even though it hurts individuals and businesses, the only way we can overcome the challenge is for each of us to do our part. Individualism, in this case, undermines the health and safety of the greater community.

Yet, there is also a growing threat to the integrity of freedom and democracy. We observe the erosion of justice and liberty as plutocrats around the world overstep the mark. Having assumed special authority due to the extraordinary circumstances, they promptly overstep the mark and abuse their powers.

Conspiracy theories also run rampant. There is a sense of deception about what is really going on. Are we being told the whole truth? Or is there something that is being suppressed because it would be too overwhelming and too frightening? Politicians never want to be the bearers of bad news (it could be bad for their approval ratings.)

Mars is separating from Saturn and forming a close square with Uranus. We are already witnessing social unrest erupting in response to the restrictions and the impossibility to live in this way for any length of time, especially for those at the ‘crumbs end’ of the social pie.

Saturn quincunx the north node also emanates an ominous vibe of collective hardship and disease. The question is, how can the population be protected from the virus without destroying liberty and livelihoods?

Is the virus the actual cause of the suffering? Or is it the system that expects individuals to battle a collective plague on their own while making sacrifices for the community?

Given the recent Saturn/Pluto conjunction and the even more recent Pluto/Jupiter conjunction, the aftermath of all this may see a profound social change, yet to unfold.

Times such as these, have enormous potential for renewal but also pose a danger to civil liberties and human rights.

The Jupiter/Pluto conjunction reflects that potential. Expansion of absolute power on one level – or a true transformation of the value foundation upon which our world is built.

This conjunction also forms a sextile to Mercury which also gives pause for concern. Mercury is still in Pisces and has not moved on much from the conjunction with Neptune. The danger here is mass manipulation and deception.

Perhaps the most hopeful aspect of the chart is Mars sextile Chiron, which signifies a highly energetic pursuit for medical solutions to our current dilemma.

But looking forward, it seems there is plenty more brewing before there will be any sense of redemption.

But, don’t despair! This is a highly potent time for transformation, for gathering your inner resources, for contemplating your values and for consolidating your support network.

We will get through it, together! 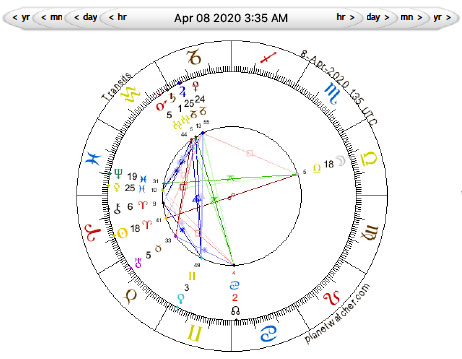