Astrological insights for the New Moon in Aries, March 24, 2020

This New Moon in Aries is quite highly focused. It is closely conjunct with Chiron, the wounded healer. In Mars’ sign, this healer and the New Moon call for decisive action. The configuration is casting a square to the north node in Cancer, which raises the question of security.

Sometimes, healing in the sense of establishing wholeness and balance means having to go to battle and to confront issues head-on. It is the task of the Sun/Moon and Chiron to protect the integrity of an organism, individual or nation.

The other powerful element in the chart is the line-up of Jupiter, Pluto, and Mars in Capricorn. Saturn has just moved into Aquarius and is currently dipping his toes into the stream of consciousness of the water-bearer. Saturn in Aquarius represents a sense of collective responsibility and an understanding of the universal principles that tie us together as a human race in interrelationship with the living earth and conscious cosmos.

However, Jupiter, Pluto, and Mars are embroiled in a power game. These 3 planets together signify tremendous power and authority. Wherever their power is wielded the question arises as to how it is used – with or without integrity and to which end.

This super conjunction casts a quintile to the Sun/Moon/Chiron conjunction. Quintiles generally receive little attention in Astrology, but, in my estimation, it is relevant here. Considering the worldwide effect of the Coronavirus crisis and the way governments are wielding their power to control the spread of the virus by imposing draconian measures on the general population, the Jupiter, Pluto, Mars quintile to Sun/Moon/Chiron seems an apt depiction. The Quintile is not 0° tight, but the close conjunctions in both cases draw these planets together.

On the sidelines, we also find Uranus in a tight semi-sextile to the New Noon and Chiron. This subtle minor aspect implies that there is some non-personal value that rises in our awareness. Since Uranus is involved, the dawning realization is probably a bit disruptive. It could be something along the lines that the reduction of CO2 is possible if it is perceived as an absolute necessity – like for example with the current health crisis that has caused chaos on the stock market but lowered emissions prior to 2008 levels at a relatively bearable cost to individuals. It could also imply a growing awareness regarding the devastating effects that constant cuts to health and social systems have when push comes to shove. Or an awareness regarding the detrimental effects of globalization and the growing social inequalities. All these dawning realizations may or may not have a lasting effect or impact on future policies. But they are lessons that COULD be learned from the crisis. 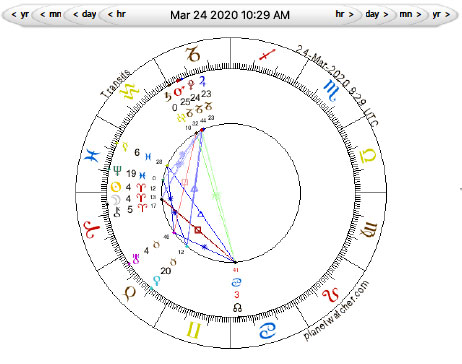