The Virgo Moon likes things nice and tidy. At least, it makes an attempt at analyzing priorities. This will not be easy under the circumstances since the Sun opposite is closely conjunct Neptune. The objectives are rather blurred, goal posts may be moving, hubris may abound, making it harder to see what is actually real and doable.

This constellation forms a sextile/trine to Jupiter and Mars in Capricorn. There is no lack of ambition. There is an air of conviction, maybe a religious belief, that is invoked as the magic carpet that will carry us through. The Capricorn planets boost confidence and give the overall impression of control, even where there is none.

There is hope but whether or how things pan out is currently not clear as Mercury is still retrograde. This suggests that we are tapping in the dark. The real facts are hard to grasp. But in order for healing to take place, for opposites to come together, they have to be dealt with at some point, and probably soon. Mercury is turning direct tomorrow, on March 10th.

Furthermore, Venus and Uranus are having a rendezvous. Despite the fact that they are not tied into other patterns except a sextile to Chiron and a sextile to the north node, it is likely that their quivers will be felt by a wider audience. This reeks of scandal. It could also signify the voice of a very outspoken woman shaking things up. OR both – astrological symbolism never just implies ‘one’ thing. There is always a wide spectrum of experience and expression depending on the sphere of life and level of consciousness with which we look at the stars.

The fact that this is a super full moon could also mean that some of the effects will take on a distinctly ‘earthly’ manifestation, and at the very least, that its effects are somewhat amplified. 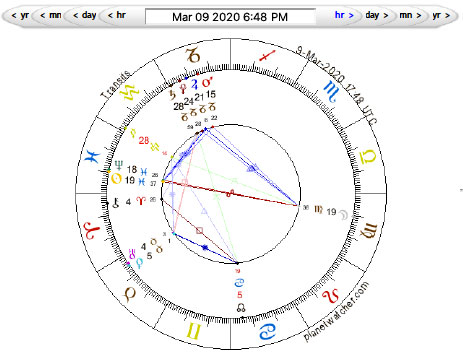