Astrological insights for the New Moon in Pisces, February 23, 2020

One would think the New Moon in Pisces is a colourful fantasy or an episode of a romantic period drama. In some ways, it is – but the romanticizing fantasy is just a way to get our attention. Meanwhile, at this point in time, a much more sordid and conniving story is going on beneath the surface.

Here we have a joint venture of two heavily emphasised signs, Capricorn and Pisces, with sextiles between them to strengthen their bond.

This is not just your usual Piscean sob story, but a whole tangle of sea-weed surrounding the issues of victimhood. We have woke to the realities of abuse in various contexts and victims are no longer prepared to put up and shut up. Which triggers a further barrage of abuse. At the other end of the spectrum, we see weaponised victimhood. Who could blame a victim for their demise? Sympathy and support are expected, and personal sacrifice for the greater cause.  You better get behind it, or else! Anyone who is not in support is a potential threat or enemy.

Pisces needs a vision, something to give it form, purpose and direction. Once it has found this it will not be deterred. It will merge with it and turn into a zealous missionary for its chosen cause. In this chart, this tendency is underlined by the sextile to Mars who is exalted in the ambitious, scheming Capricorn. Such a constellation can signify ruthlessness and given the fact that Mars is also trining Uranus, it is like to be expressed in a highly erratic or disruptive manner.

Capricorn is highly prominent in this New Moon chart, with Mars (exalted), Jupiter, Pluto, and Saturn all gathered there.  Mars is sitting right atop the south node, battling the baggage of the past. Mars in Capricorn is ambitious and action orientated. He has a definite agenda and applies all his focused energies on achieving his goals. However, he does so without regard for others and can be rather merciless and single-minded. The other planets are not in direct contact with Mars, so he wields his power unchecked.

In his endeavour Mars is strengthened by the New Moon in Pisces. He is empowered to act on other’s behalf. This is a classic image of the over-zealous missionary. Someone who disguises his own goals in the cloak of devotion to a greater cause. And to this end, he is willing to sacrifice whatever it takes to achieve his goals.

Pisces is also populated by a Stellium. Apart from the Sun and Moon, Mercury and Neptune are also here. Such a meetup greatly reinforces the Piscean themes of this New Moon.

Neptune is forming a sextile with Jupiter, which can appear to lend credibility to Neptunian plots. Helpers in high offices may be complicit, or actively seeking to legitimise fraud. Neptune’s visions or delusions, whichever the case may be, are presenting as ‘the new normal’ and go unchallenged.

Mercury has gone retrograde and is staying out of all this. There is also no air in this chart, which means that the element of rationality is conspicuous only by its absence. Chances are, whatever is in the public eye at this time will be revisited later. Not all the facts are on the table.

Chiron and Venus, both in Aries, cast squares to Mars and Jupiter, the main actors in Capricorn. This emphasises the self-centered element in this myth of the savior, as enacted by Mars. It reveals an underlying sense of entitlement and heroic self-image-which may just compensate for the pain of some deeper wound.

Mars forms a trine with Uranus, which in Earth signs can imply some serious rumbles. Whether these manifest in the social sphere or take a more geo-physical form, remains to be seen.

Bottom line: Beware of the false prophets and their self-appointed mission as champions for the underdog. Robin Hood seems like a good fellow. He thrives on the glory that comes with being the champion of the underdog. In the end, he is more interested in his own heroism than in saving the poor.

On a personal level, the energies of this chart can of course also be used constructively. It is a good time to fuse your visions and intentions, whatever you care about most, with the practical and goal orientated power of Capricorn. But, stay sensitive to the needs of others and try not to steamroll them with your solutions (even if you think they are the best). The most positive outcome can be achieved if the Capricorn power is placed in service of a deeper, spiritual need and mobilised to help manifest practical solutions that will make your visions real. 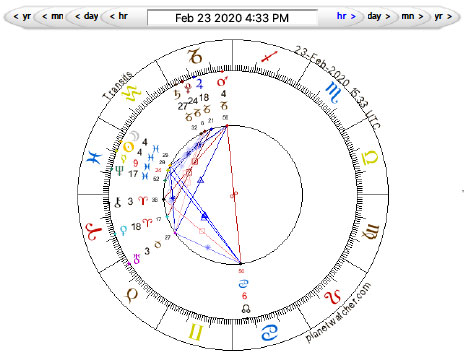