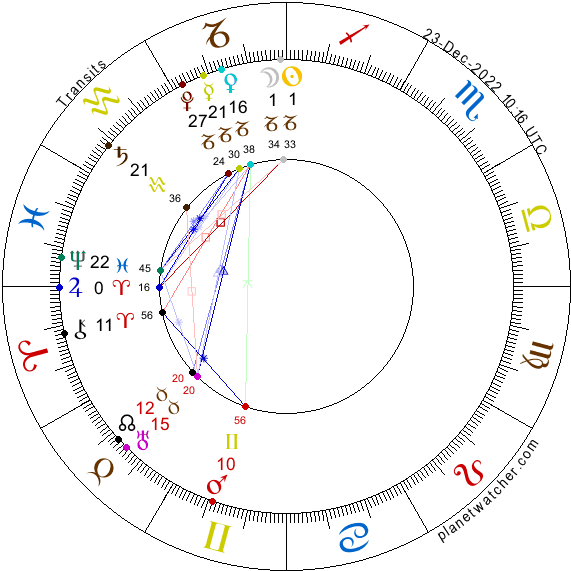 The New Moon in Capricorn is an earth party. More specifically, it is a Capricorn party, with the Sun, Moon, Mercury, Venus and Pluto are all gathered in this ambitious yet pragmatic sign.

The Capricorn New Moon comes on the heels of the Winter Solstice, just a day before Christmas Eve. It is a time of forgiveness, hope and anticipation of what the new year will bring. And it is also a time of sharing, bonding and confirming family and friendship ties.

Not everybody cares about traditions, of course. For some, the festive season is a matter of obligation and work.

On an inner level, it is an opportunity to take a moment to reflect on our motivations and purpose. Why do we do the things we do, and where do we want to take them?

Jupiter has just moved back into Aries and squares the New Moon. This time, Jupiter won’t slide back into Pisces again. It is marching through Aries at quite a fast pace, spreading an air of optimism and determination. It is time to get moving and pursue our goals.

The square tests our resolve. It’s time to show the world what your dreams are made of and demonstrate that you have what it takes to pursue them. If you mean business, set all dials on ‘go’ and don’t hesitate.

Mercury and Neptune are sextiling each other, bolstered by Saturn, which sits between them at their midpoint. This pattern conjures the image of an idea foundry.

Neptune/Mercury are full of visions and dreams. Saturn, holding the balance between them, adds an element of realism, checking if those dreams have the potential to become realities.
Saturn can be harsh and given to negativity. But don’t let scepticism hold you back or put you off. Instead, take reasonable objections into consideration and make a better plan.

Anxiety is normal, but instead of pouring water on your fire, turn it into a thrill. Ask what if? What else? And why, or why not? Keep digging deeper without fear or attachment. The further you let the mind roam, the better your chance to hit gold.

The north node is at the midpoint between Chiron in Aries and retrograde Mars in Gemini. Mixed messaging, misinformation, and uncertainty confuse social issues of public importance.

A trine between Venus and Uranus is exciting. But Venus in Capricorn does not easily fall for headless fancies. Nevertheless, things can sometimes pop up unexpectedly, out of the blue. This can, but does not necessarily, play out in the romantic sphere. It could also be the kiss of the muse catching you unaware.