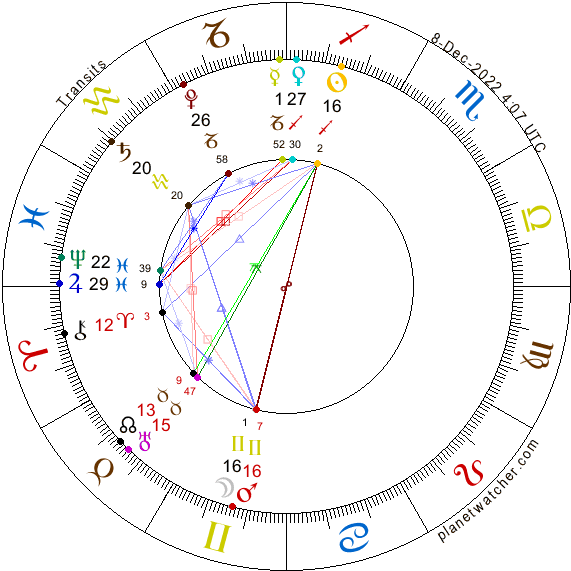 The Full Moon in Gemini galvanizes the potential of the previous New Moon. Ideas are turning into action.

Mars adds zest to the lunar sparks that previously had nowhere to go. Suddenly they are energized and transformed into actionable game plans.

The semi-sextile between Moon/Mars and Uranus is receptive to left-field impulses that can move things in surprising ways. But Uranus is also forming a quincunx to the Sun. Its unconventional approach could be awkward or incompatible with some objectives.

The square between Saturn and Uranus has widened. Recent protests have had some effect, but peace and quiet have not yet returned. Meanwhile, another, dark aspect is coming onto the scene – the opposition between Pluto and Lilith. This is a struggle for dominance. Inequality hardship, a sense of rejection has created a gaping chasm, and for some, there is not much to lose. They are willing to risk everything.

Venus tries to mitigate, but the situation is hard to reconcile. Smoothing over a deep wound will not heal it. The situation calls for meaningful change.

Jupiter in Pisces squares freedom-loving and happy-go-lucky Venus in Sagittarius. A gushy, sentimental Jupiter in Pisces can be uncomfortable for Venus. Jupiter rules both signs. It is best to take a philosophical or spiritual approach.

Mercury squares Jupiter, but this square is dissociated. Earth and water are a bit more compatible than fire and water. Mercury takes a pragmatic approach to Jupiter’s fantasies, but in the process, they lose some of their romantic appeals. This is a fruitful, if challenging aspect for those with ambitions to write. Mind the zealousness. .