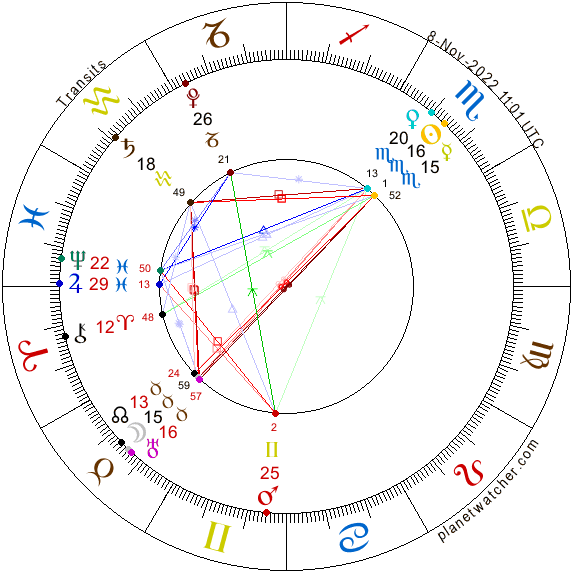 This eclipse Full Moon in Taurus is a crunch-time moment, a make-or-break situation.

Eclipses are pivotal moments, turning points when events become significant over an extensive period of time. They set us on a trajectory that determines the course of events for the weeks and months ahead. Weigh your words and choices carefully and consider the long-term consequences.

Saturn and Uranus are separating, but there are still not even 2 degrees between them. Thus, Saturn forms the foot of the t-square. There is a heavy weight on its neck, and the stakes are high.

Although Saturn in Aquarius is the key, it is ambushed from all sides. Venus, Sun, and Mercury in Scorpio pull the strings behind the scenes while Uranus and the Moon play the emotional triggers, creating a big fuss. Saturn must find a way to balance both sides and do the right thing.

Venus forms a square with Saturn, which pulls it into the dominant T-square. Social relations are strained, formal and distanced.

A trine between Venus and Neptune creates a slight buffer or at least a show of civility, which might soften the fall-out from the embattled planets.

Mars is now retrograde, suggesting that double-faced tactics are used to get his way. In Gemini and quincunxing Pluto, it can mean gaming the system. Sowing doubt undermines trust, and gaslighting can be used as a strategy.