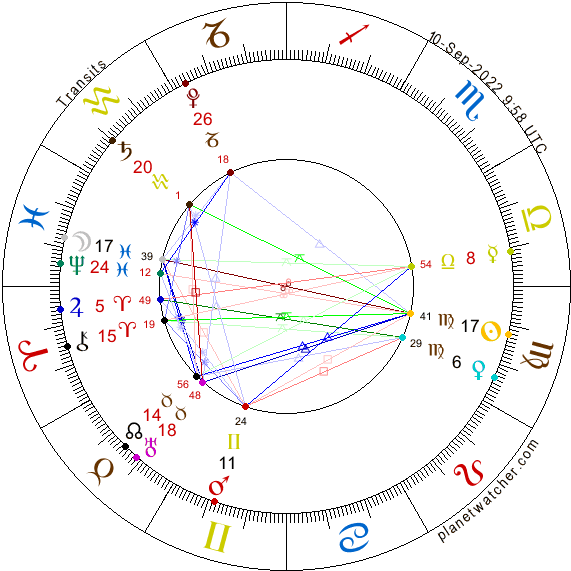 The Full Moon in the transient ethereal sign of Pisces feels a bit ungraspable. There are a lot of uncertainties. Fragmented pieces, unfinished business, inconclusive questions suspended in mid-air. We have all the evidence, but there is such a large amount of information that it is difficult to make sense of it. The Moon is conjunct Neptune. Emotionally, we are in the stew, shifting and changing like the ocean currents. The mutable signs, Pisces, Virgo, Sagittarius and Gemini, are changeable by nature.

Virgo’s sense of coherence stems from its competence and uncanny ability to make sense of almost any amount of data points. Here, the Sun in Virgo tries to battle against this tide and organize the flood to avoid getting overwhelmed. But this battle is like fighting windmills. Pisces, on the other hand, does not get bogged down with details. It hates getting pinned down and having its options limited or even defined. Yet, often that is what it needs most to do its best work.

How to handle the uncertainties?

Under the circumstances, it is best to maintain a flexible mindset and not get stuck on a particular game plan. Play with the possibilities rather than dismissing the wilder options out of hand. You never know where that little question of ‘what if?’ might lead.

Uranus is still conjunct with the nodal axis, but not as close as it was a month ago. The Full Moon forms a trine/sextile constellation with them. This signifies an opportunity to embrace change despite the challenges.

Change always brings disruption, but resistance makes it only more painful. Acceptance lets you see beyond the turmoil. You might even get a glimpse of the possibilities.

The sesquiquadrate between Mars and Saturn is one of those obstacles. Both are in air signs but Saturn is still retrograde and hesitant. It is easy to feel burdened by it all. Mars is in Gemini, a fickle sign. It is difficult to create a road map as long as the goalposts keep changing. We can play with options, possibilities, and best or worst-case scenarios. But it is probably best not to make any final decisions just yet.

Jupiter retrograde is slowly sliding back into Pisces. But first, it will form a semi-square with retrograde Saturn. As both planets are retrograde, things we thought settled could begin to unravel. It is a good idea to revisit those items for a reality check. Do they really move us closer to our ultimate goal? Are they necessary detours? Or would they take us completely off course?

Retrograde Jupiter also forms a wide trine with Mercury in Libra, which stations on this Full Moon, launching its retrograde period. Mercury may have to sweet-talk over some of Jupiter’s earlier boasting, which came too soon and too loud.

Quincunxes are impossible riddles. It is not an easy either/or choice, but a situation that calls for a decision, but either solution will have unwanted consequences and are mutually incompatible. It is the opposite of ‘win-win’. Neither option is ideal, yet we must find a creative way to handle the situation. Venus in Virgo wants order and can be pedantic. Jupiter is less fussy but bossier. It feels hampered by too many details and worries. If pushed, he may lash out or take an irrational decision simply because Venus’ niggles are so annoying.

This aspect is not very strong, but may offer a way through incongruity. Mercury in Libra is diplomatic and can see things from all sides. Choosing the right words and deciding what to say or not to say will be instrumental in finding a solution.