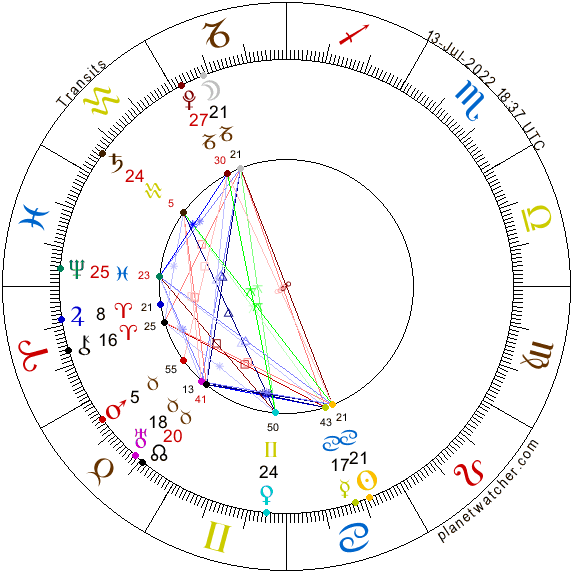 The Full Moon in Capricorn crackles with intensity. The Sun, Mercury and Lilith are in Cancer, and the Moon opposite, in Capricorn, is heading for Pluto, the planet of fundamental change.

The Full Moon axis aligns with the nodal axis to form a ‘mystic rectangle’. The Full Moon tensions can perhaps be more easily resolved than expected. A quantum leap in consciousness is possible, especially given that Mercury conjuncts the Sun, the Moon is closing in on Pluto and Uranus conjuncts the North Node. Far-ranging changes are afoot, but they are currently still ripening. Prepare for significant structural change.

Mercury is never very far from the Sun. In Cancer, he brings stuff into conscious awareness and mulls it over, considering the emotional aspects, attachments and implications. This can be deeply unsettling until the Sun and Mercury find a way to integrate the material into conscious awareness. An emotional breakthrough is rearranging the interior. The rational mind has to find a way to justify and implement the call for change from within.

Mercury sextiles Uranus and the North Node, which suggests that latent possibilities will be acted upon. The potential for learning and development is present but might manifest abruptly and in a guise that brings upheaval. The Moon and Pluto are also involved. In Capricorn, they both advocate for controlled change, which, under the circumstances, may not be easy to implement.

The square between Mercury and Chiron signifies the healing potential of this crisis once it is confronted and expressed.

The trine between Venus and Saturn does not directly interact with the main pattern of the chart but helps ease the transition, despite making a somewhat awkward contact with the Sun and Moon. Venus shows her lighter, more rational and humorous side. Even upsetting stuff is easier to process with a light heart.

Venus and Saturn facilitate the integration of the emotional load of this Full Moon but we can’t see clearly until we get out of the soup. Some murky items are lurking in the wings. When they finally emerge, they may alter the perspective or course of action.

Quintiles and Biquintiles are generally not worth considering in a Moon chart. But in this case, they connect Mars, which makes no other aspects, with Mercury and Saturn. It draws attention to a smouldering fire that must be attended to. If left unaddressed, conflict can erupt at any time. The quintile series is associated with the use and abuse of power. Mercury and Saturn are closely entwined with the main pattern of the chart, highlighting impending structural or institutional change.

Power/authority issues are in focus on this Full Moon.