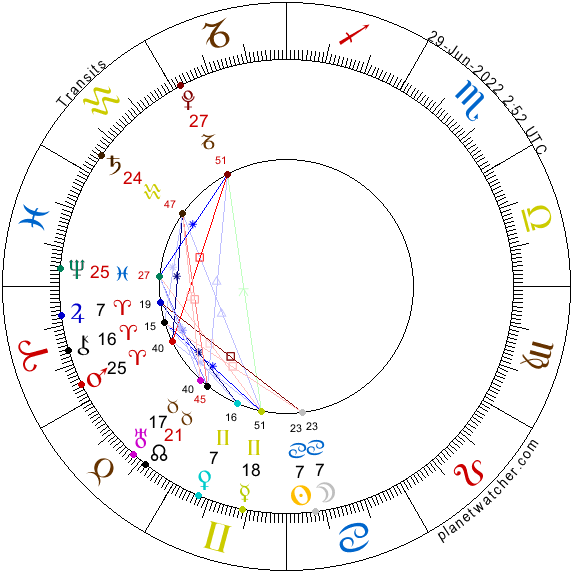 The New Moon in Cancer is about the sacred feminine power of nature as a generative and nurturing force. This is not just about having babies or taking care of those in need. It is about giving space to emerging creativity.

This particular New Moon in Cancer is closely conjunct with Lilith, the ‘dark moon’. Lilith is not an actual physical thing, but denotes the point of maximum distance between the moon and the earth. It urges us to create healthy boundaries and not to succumb to ‘helper syndrome’. It is okay to say ’no’ to others when you need to take care of yourself.

The New Moon in Cancer is a bit frazzled by Venus in Gemini. Gemini is a social sign, and Venus wants to dance at every party. But the New Moon in Cancer gets exhausted by all this external activity. Ask yourself what is really important to you, and who you are trying to please?

Jupiter is in Aries, a powerful go-getting sign. This fiery energy can be overwhelming. The Moon in Cancer may temper it – or play the drama-queen.

Semi-sextiles are often little more than an impulse, a vague and fleeting idea that pops into the mind. For the most part, nothing comes of them because we are too busy with our everyday chores to even notice these stirrings. But when we pay attention and catch them while they are fresh, they can indicate the first nascent stirring that calls for change. There is no plan yet, no real sense of direction, just a longing. Wouldn’t it be nice if…
There is potential in such stirrings, but we must pay attention and nurture it if anything is to come of it.

Mercury forms a sextile with Chiron. Healing is not just a matter of taking this or that medicine to make us feel better. Crucially, it is the insight that propels the healing journey. We must face the ‘wound’ at the root of the crisis, and accept things as they are, before we can look for solutions. Denial would only make things worse.

The sextile between Jupiter and Venus is full of flair. Jupiter in Aries is filled with visions and its eventual outcome (glory unto him), while Venus in Gemini communicates the cause and wins support from her network.

Mars is making a series of aspects, but all to the slower moving planets. A semi-sextile to Neptune denotes dreams of things that would be nice to have or do, but it lacks the energy to pursue them. Or, Neptune can give Mars such an overwhelming pile of dreams that he has no idea where to start.

Mars also forms a sextile with Saturn, lending stamina and practical thinking to Mars’ rash endeavours. This provides focus and the chance to make something of the ideas that Neptune might have whispered in his ear. The potential is there.

The square to Pluto indicated that it is not smooth sailing. There are challenges to overcome on the structural level. Before moving forward, certain changes have to be made, which can spell conflict. Address any possible objections and take concerns seriously to find solutions that work instead of attempting to barge through them to get to your objective.