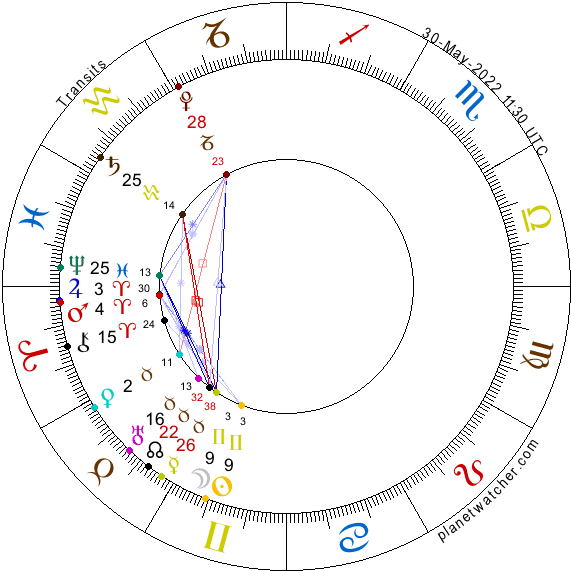 The New Moon in Gemini augurs a time of intensifying social contact. It is late spring or early summer, depending on how you want to look at it, and nature is in its prime. The buzz in the natural world sparks a resonance in our social world.
It is also a time of learning as youngsters are sitting their exams.
No doubt, all this is happening this year, as it does every year. But the New Moon sits on its own, without making any aspects to other parts of the chart. There is a kind of disconnection between what is right and natural at this time of the year, and the reality of the many issues casting their rather large shadows over our frolicking.

Mercury is the ruler of Gemini, and he is currently retrograde in Taurus. No doubt, this has some bearing on why the mood is the way it is. Mercury is the God of Communication, and usually, he is always up to something. But when he is retrograde, things often don’t go as smoothly as we had hoped. Mercury retrograde is famous for throwing spanners in the works. Keep a flexible mind to reduce your own stress level and anxiety.

Mercury’s square to Saturn further complicates the situation.  This aspect suggests narrow-mindedness. Both Saturn in Aquarius and Mercury in Taurus can be obstinate and opinionated. This aspect pattern suggests that opinions are entrenched with little room to shift. At best, there might be a stalemate. At worst, things could slide backwards rather than taking a positive turn and moving forward.

Mars conjunct Jupiter suggests totally different energy, and in Aries, this is likely to produce some fireworks. In Aries, these two are enthusiastic, confident, and proud. Their way is best, and they are not really willing to compromise. This combination can be great for entrepreneurs or anyone with a vision and ready to make it happen. Mars and Jupiter in Aries don’t take NO for an answer, no matter how hard Saturn’s square to retrograde Mercury raises objections. And that is probably a good thing. But nevertheless, it is worth listening to Saturn/Mercury to grow awareness of what could go wrong.

Venus has just entered her favourite comfort zone and is currently residing in Taurus. The first aspect she makes is a semi-sextile to Jupiter and then Mars. This combination suggests a bit more daring than she would be inclined to in Taurus. This could be positive energy for upstarts, but by extension, for any new adventure or enterprise. Venus in Taurus tempers the Jupiter/Mars energy, but it can be greedy if it gets out of hand.

The aspect that has been prominent throughout the pandemic is beginning to separate. Let’s hope this indicates that the pressure is easing and not get worse again.