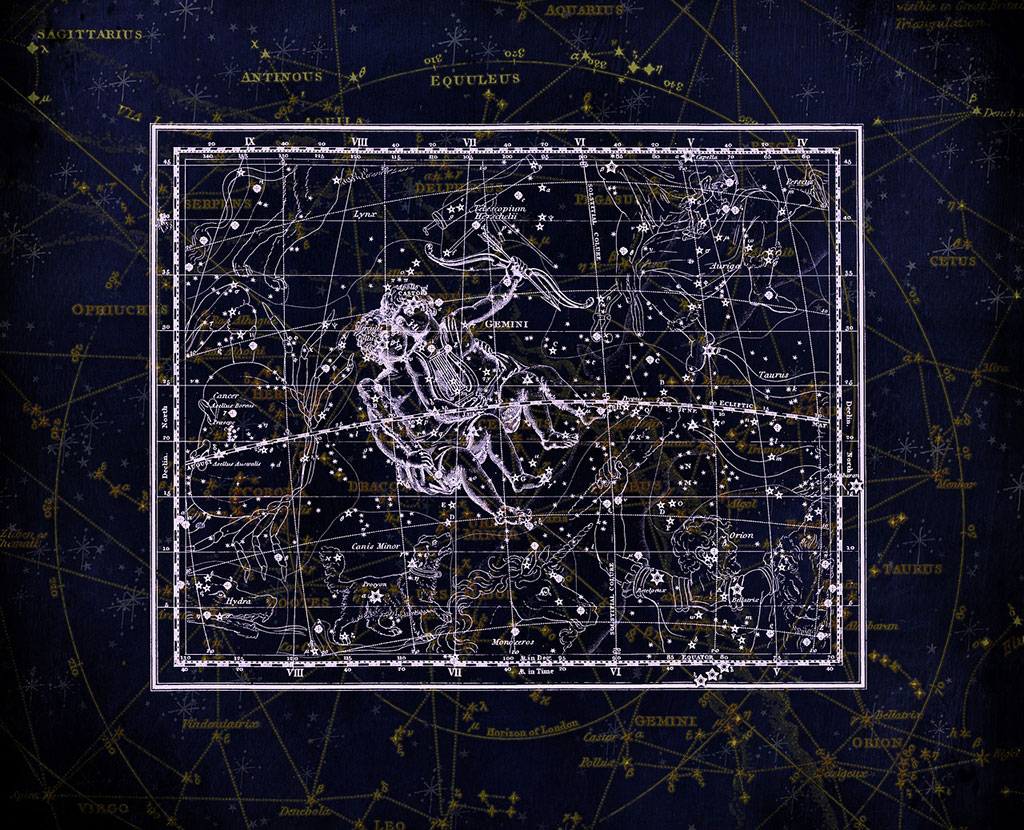 Gemini is the sign of the twins, an air sign under the rulerships of Mercury.
Air is perhaps the most abstract element – we cannot see it, yet without it, we could not breathe. There would be no sound, no spoken word, nor music. Thus, the air connects us, conveys our messages, and carries our prayers to the heavens. It may be invisible, but it is essential.

Gemini is a dual sign, which implies that there are two sides to its character – but only one of them is visible at any one time.

In Greek mythology, the myth of Castor and Pollux tells the story of the twins. They are the sons of the Spartan Princess Leda and Zeus, the King of the Gods.

Zeus was well-known as a rampant womanizer, always in pursuit of beauty, while his jealous wife Hera was always hard on his heels. To hide his traces and conceal his true identity, Zeus frequently disguised himself. When he laid eyes on Leda, he approached her in the guise of a swan. Leda became pregnant, and soon Castor and Pollux hatched from a single egg. Castor and Pollux loved each other, but despaired when they learnt that only Pollux had inherited their father’s immortality. Unable to accept this unhappy state, they pleaded with their father, asking him to let them share the same fate. Either he grants them both immortality, or they would both want to die together.

Unable to grant them their wish, Zeus offered them a compromise: They could share their fate and become mortal and immortal by taking turns. When Pollux spent his day on Mount Olympus among the immortals, Castor dwelled in Hades. But when night fell, they switched roles.
This was not a perfect solution since they could never spend time together, except for the brief moments in passing.
Eventually, their longing for each other grew unbearable, and they begged their father again to let them die together.
Touched by their love, Zeus granted them a place among the stars and immortalized them in the constellation of the twins.

This story reveals much about the dual nature of Gemini, and by extension, about the human condition. We are all immortal souls trapped in mortal bodies. Gemini is acutely aware of the duality of our existence
and often vacillates between divine ecstasy and despair. But luckily, his emotions are as mercurial as is his mind, and change is always just around the corner.