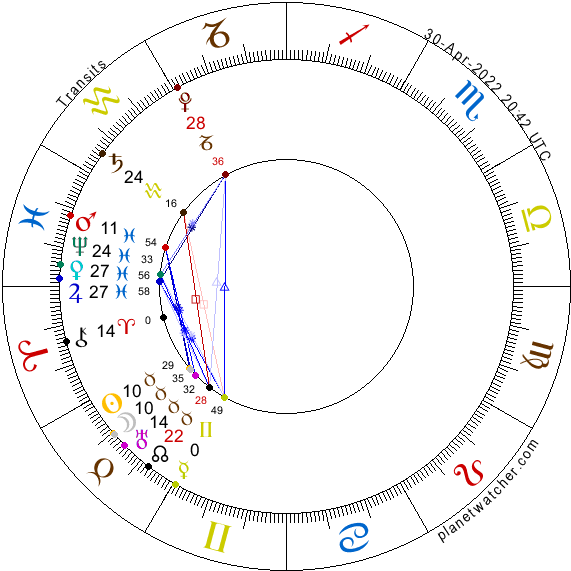 This New Moon in Taurus also happens to be the first eclipse of the year. It is quite a densely packed energy bundle, dominated by a stellium in Pisces and three planets plus the north node in Taurus. Let’s unpack it.

New Moons mark seminal moments when a new cycle can begin. This energy is even further emphasized when the New Moon coincides with an eclipse. The Ancients deemed them ominous, but modern astrologers look for the opportunity inherent within them. Eclipses, especially when they touch on significant planetary positions or angles in the personal horoscope, are times of change. When there is resistance, this can feel like a crisis, but if you accept it and claim it as your power, you can run with it.

The Sun and Moon are in Taurus, but they are quite far from the North Node. Nevertheless, the gap will soon be closed.

The Sun and Moon form some powerful aspects – like the conjunction with Uranus, which may shake things up. Although Taurus is usually depicted as a reliable and even predictable sign, this combination could have some surprises in store. On the macro-level, this could indicate severe weather events such as heavy rain, storms, flooding or even earthquakes or volcanic eruption. This won’t affect all regions, naturally, but could be severe where it does hit. Or, it could bring some other unsettling events to the surface – especially concerning financial matters. Things are definitely not as reliably solid and secure as what we may be used to. On a micro-level, if changes are afoot, now is the time to set clear intentions and reorientate your compass needle. Changes can be dramatic or subtle – pay attention to ‘chance’ events.

Mars is still in Pisces and sextile the New Moon in Taurus. This smells a bit of martyrdom. Mars in Pisces likes to sacrifice himself for a cause. It’d better be worth it. This is a good opportunity to take a close look at your deepest values, at the root of your being.

This horoscope is not only significant for the eclipse New Moon, but also for the very tight Venus/Jupiter conjunction. This is a thoroughly romantic combination, but beware! Neptune is pretty close by as well. Take a step back and try to get a realistic perspective before throwing all caution to the wind. There could be an element of deception (or delusion).
Nevertheless, Jupiter and Venus are sextiling Pluto. The appeal is powerful and enigmatic. This combination can be very appealing when seeking support for a cause. It will certainly catch attention, no matter the circumstances.
Artists and mystics are perhaps most affected by this aspect pattern.

This aspect looks fairly minor, at first. But, both planets are also aspecting the nodal axis. Saturn squares it, and Neptune casts a sextile to the North Node and a trine to the South Node. The nodes are especially significant in this chart because of the eclipse. The semi-sextile between Saturn and Neptune in this constellation signifies latent inner resources. They may not be obvious, but our beliefs and values shape our decisions, and thus, our path in life. The aspect could signify a sacrifice for a social cause.

The fact that the Saturn/Neptune semi-sextile interacts with the nodes indicates that it has an effect in the context of the social dimension. There is a sense of social cohesion, even if the binding factor is shared pain.