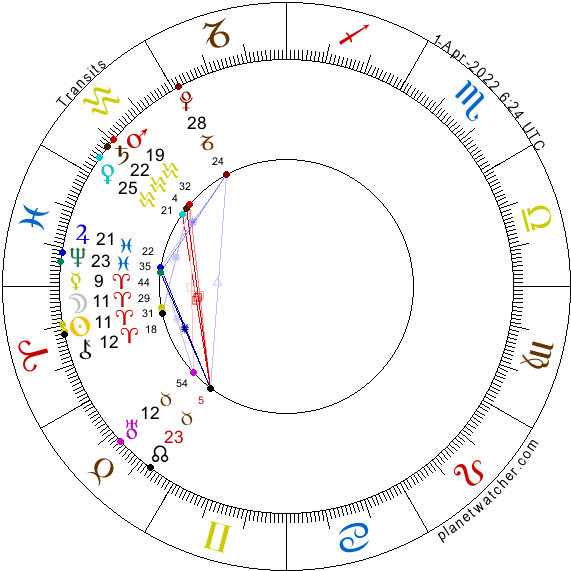 A high-velocity New Moon in Aries ushers in the month of April. Mercury, Sun, Moon and Chiron are all conjunct – it’s a riot.

The Sun and Moon are conjunct Mercury and Chiron. Together, they are making a lot of noise and are vying for attention. But, they are not connecting to any other planets. The New Moon chart shows several distinct clusters. This Aries cluster only links out to Uranus, and Venus, both via minor aspects.

This aspect has been prominent during all significant times during the pandemic. Chiron is again very closely tied into a semi-sextile with Uranus. But in this horoscope, they are also linked to the New Moon. Looks like the heat is being turned up a notch. For the first time, we have more individual freedom AND rapidly spreading cases. It’s not over, even though it is currently playing a more minor role in the news cycle.

Venus has picked up quite a bit of speed since turning direct. She is now on the far side of Saturn and just about to enter Pisces. Mars, on the other hand, is still inching closer toward Saturn. (The exact conjunction is on April 5). These Saturn conjunctions can be a bit of a cold shower: Saturn tests the commitment and demands a realistic, down to earth approach. Conjunct Mars, it can be sobering and frustrating or even generate anger. But if Saturn manages to direct that Mars energy in a useful way, the two can move mountains.

Venus forms an uncomfortable semi-square with Mercury, the Sun and the Moon. Arguments are pre-programmed. Socially unacceptable behaviour will be called out. Adjustments must be made.

Jupiter and Neptune, the rulers of Pisces, are joining up for a memorable splash. Neptune is often described as dreamy, but that really underrates the Lord of the oceans – he has a lot of power. He rules Tsunamis, floods and volcanoes. Don’t just expect pixies and fairies!

Jupiter is traditionally seen as the great benefactor, and in Pisces, he has a spiritual bend. But he is never modest, and whatever he does he is likely to overdo. Jupiter knows no boundaries – least of all in Pisces. His visions are often larger than life, and that can be his downfall. His power does have limits, but Jupiter is blind to them.

The conjunction will be exact on April 12, so the next couple of weeks may be quite a wild ride. Capture those grand ideas, but take a close look at them before running out of the gate to pursue them. Saturn casts a supportive light, but he won’t go along with chasing unicorns.

Saturn mingles with Jupiter and Neptune via a semi-sextile. This aspect unveils latent opportunities with the potential of turning into something tangible.

Ride the wave of the imagination, but don’t get carried away!