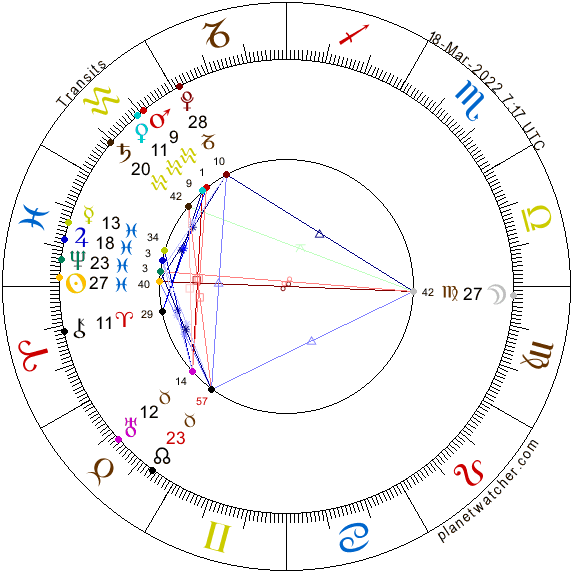 The Full Moon in Virgo draws attention to the details-in stark contrast to the Sun, which is having a wild time with Neptune, Jupiter and Mercury in Pisces. Pisces sees the big picture and follows a hunch, while Virgo tries to nail it, and get down to the grit.

The Virgo Moon is meticulous, analytical, and down to earth. But it has to use all its might to stay grounded in the face of the more fanciful but ill-defined visions of Mercury, Jupiter, Neptune and the Sun in Pisces.

Pluto in Capricorn is uncompromising and calculating. Although often celebrated as a ‘transformational’ power, its transformation is not an amble down the garden path. Pluto’s energy can be overbearing, manipulative and obsessive. He is an awkward bed-fellow, even when making a ‘good’ aspect to another planet. Pluto’s dark obsession influences the Sun’s vision and the Moon’s systematic approach. But it is Pluto, who is driving the agenda. And Pluto is not very compromising.

Lilith forms a T-square to the Full Moon axis, so another force in the shadows acts upon this Pluto configuration. Lilith is quincunxing Pluto and the South Node. The skeletons of the past are trying to escape the cupboard.

The Full Moon also receives a little energy from Uranus, and it is the disruptive kind. Unexpected moves can throw a spanner into Pluto’s moves. Uranus in Taurus is disruptive, edgy and stubborn. Prepare for challenges and provocation.

The sextile between Uranus and Mercury has a more innovative tone. Perhaps a new way of seeing or thinking about something inspires new ideas.

Mars and Venus have been dancing together for a while now. Venus has overtaken Mars, and they are a couple of degrees apart but still very close. Now in Aquarius, their bond is likely to become more independent. Venus will do things her way, and Mars pushes for his independence. Both are too far from Saturn, also in Aquarius, to be impacted by his rigours.

Squares are stressful aspects, compelling us to act. Venus and Mars are in freedom-loving Aquarius, Uranus co-rules with Saturn. We, who have personal planets in the fixed signs between 9 and 12° degrees, may feel rather uncomfortable with this configuration. Something must give way. There is a strong impulse to push, to break free. Uranus in Taurus is not the compromising type.

If Chiron is an indicator of Pandemic news, this aspect suggests that we gotta do what we’ve gotta do. Life waits for nobody.

Chiron sits at the midpoint between Uranus and Mercury. If Chiron has anything to do with the pandemic, (as it seems to), this aspect may reveal some new information. Perhaps, there has been a medical breakthrough or, god-forbid, a new variant appears.

But not everybody buys into this new information, especially when it does not conform with their beliefs. Confirmation bias is widespread – we look for news that confirms what we already know or think we know.

Semi-squares are irritations rather than full-blown battles. Nevertheless, Mars is quarrelsome. A belief system or ideology is under attack.