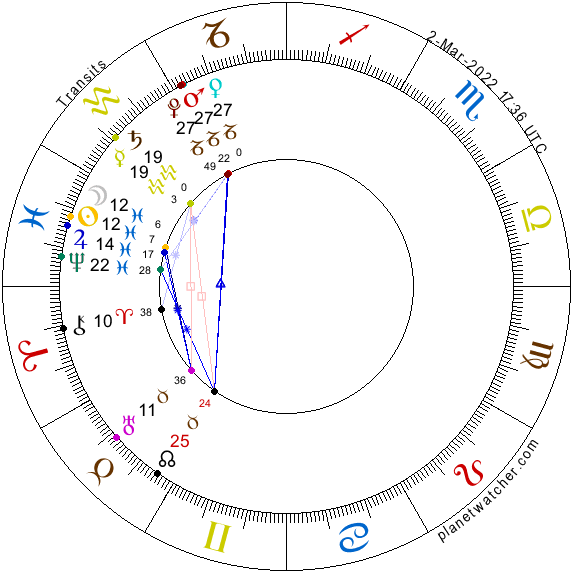 The New Moon in Pisces offers a chance for a spiritual reset, an opportunity to contemplate the big picture and where we are going, spiritually and morally, as a species. We need a perspective that goes beyond black and white and can enlighten us with wisdom. There may not be anyone forthcoming in the public sphere, but we can search out this place in our own solitude, and ask ourselves what it means to be human -, especially in the face of atrocity.

The Sun and Moon are closely conjunct Jupiter, King of the Gods. Jupiter, especially when in Pisces, has a tendency to spiritualize and put an optimistic, hopeful spin on things. The grander the vision, the more intoxicating it becomes. And with Neptune also close by, the vision is likely to be VERY big. This conjunction almost has a missionary quality to it, but this can also be delusional. Sometimes, we just have to trust that instinct, even against our own better judgement. That does not mean we are infallible, but it might just give us a better chance to succeed. And you never know – sometimes we do get help from the gods.

The counterpoint to that Piscean world of make-belief is the rock-hard conjunction between Venus, Mars and Pluto in Capricorn. As much as I would love to see this as a passionate love affair – I just can’t. It rings too much of obsession, power, and control. There is no yield, nor consent. Chthonic forces are at work!

The Sun and Moon are also semi-squaring Venus, Mars and Pluto in Capricorn. Semi-squares tend to be stubborn. There is very little room to compromise or adapt to changing circumstances. However, this aspect’s stubbornness can also mean persistence and endurance.

Although these are not very strong aspects, they are very tight. It suggests that the combined power charge of the triple conjunction is fed by a non-personal source, and that it significantly influences our collective destiny.

Mercury and Saturn are exactly conjunct on this New Moon in Pisces. The combination of these two planets in Aquarius has a serious, but cool-headed, rational and humanitarian flair – quite the opposite to the emotional and obsessive triple conjunction between Mars, Venus and Pluto in Capricorn. Unfortunately, the Mercury/Saturn conjunction stands on its own; Mercury and Saturn are loners in this chart with no other aspects. An isolated spark of reason.

New Moon and Jupiter in Pisces sextile Uranus in Taurus

Pisces is a fluid sign, hard to pin down or to define. The New Moon in this sign shows its generative potential. There is something brewing in the ether that may well begin to spread rapidly through the collective subconscious. With Uranus forming a pretty tight sextile to the New Moon, and Jupiter, there is an unpredictable element that may express itself through technology or some kind of surprise manoeuvre.

The ongoing semi-sextile between Uranus in Taurus and Chiron in Aries is still operational, but separating. Global public health issues continue to shape our everyday experiences, but currently, the influence of Uranus is waning.