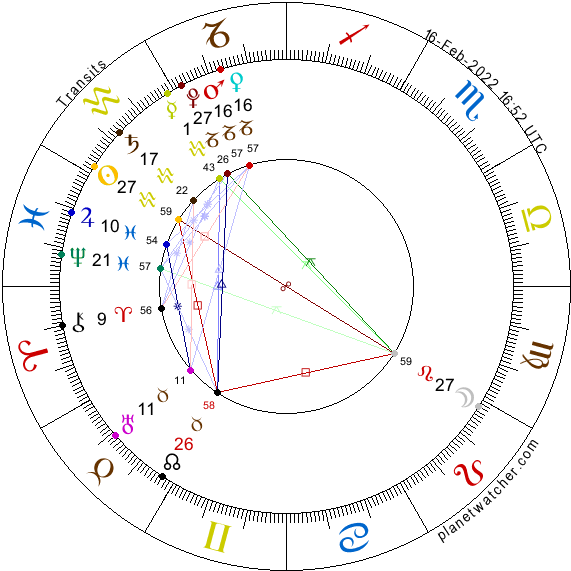 The Full Moon in Leo is about striking a balance between self-interest and the greater community. It is about mediating between personal and collective will. It is a challenge, especially this month.

The Full Moon in Leo squares the nodal axis, creating tension across the chart. The Moon is isolated in this part of the chart: the rest of the planets are all on the other side of the nodal axis. Pluto also has a lot of power, receiving aspects from the Sun, Moon and the nodes.

The Moon in Leo is on its own and isolated. It gives the impression of a drama queen, set against the rest of the cast.
The Sun in Aquarius is more socially minded. Pluto backs the Sun. The Sun stands for authority and leadership – and Pluto for autocracy. The Moon in Leo is not happy about it, but it is a bit of an outlier in this chart. It is getting a lot of pressure from Pluto and the nodes. Despite its position in Leo, the Moon will find it hard to get its point across.
In more personal terms, personal interests can clash with the demands of the social world and its power institutions.

The Venus / Mars conjunction is exact on this Full Moon – the peak of a long courtship dance that continues to the end of March, when Saturn separates them. However, they only reach their bases at the end of May, when both planets are in their respective signs, Venus in Taurus and Mars in Aries.
Generally, a Mars / Venus conjunction is described as passionate. But this can hardly be the case here. They are conjunct in Capricorn, of all signs! Mars in Capricorn can be described as strategic, determined, and disciplined, while Venus in Capricorn is characterized as no-nonsense, and hard-nosed. Unless you happen to be Capricorn, this is probably not the romantic tête-à-tête you might have hoped for. Partnership agreements can resemble business contracts.
In mundane affairs, this combination can denote hard-driven bargaining diplomacy.

Mars and Venus are relatively unimpeded, except for a sextile to Saturn, demanding accountability.
Mars and Venus are planning their moves very carefully while keeping their ambitions under wraps. Collaborations tend to be all business, with no sentiments.

Jupiter and Uranus form a sextile, the midpoint of which falls onto Chiron. Jupiter symbolizes expansion, and Uranus suggests sudden, unexpected, and disruptive events. Since Chiron sits right between them, it looks as though health issues are still of concern. But the main aspect is the sextile, which suggests adaptive learning and preparedness based on experience.