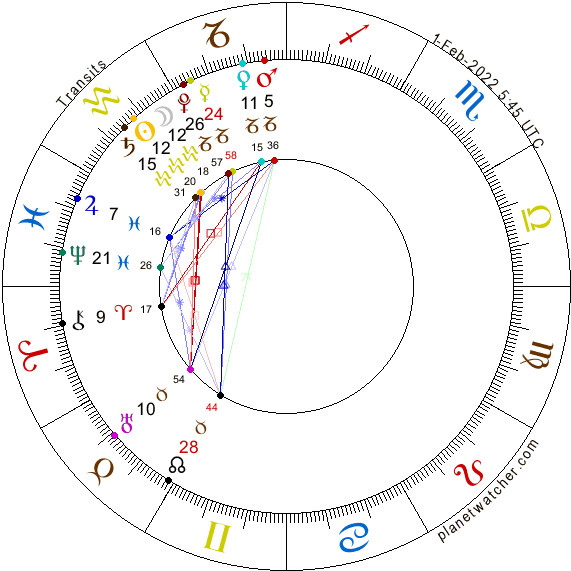 What can we expect from this New Moon in Aquarius?

The New Moon in Aquarius on February 01, 2022, signals the beginning of the Chinese New Year – the year of the Water-Tiger. Although this blog is not about Chinese Astrology, the Tiger energy can certainly be felt at this bristly time.

The New Moon joins Saturn, who by now has reached the middle of Aquarius. Social responsibility and social restrictions are very much in focus and call for restraint.

The New Moon is squaring Uranus, which always has a surprise in store. Squares indicate a decisive moment. Stress has built up and inaction is no longer possible. Something has to give. There is an action potential due to a high level of frustration. Given that Uranus is involved, it could be a radical move. The call for liberty clashes with reality and its restrictions. Tensions are running high.

Venus has turned direct again and is making its way back through Capricorn. She semi-sextiles the New Moon. Her recent experiences can now be assimilated and integrated into the collective consciousness. A chance for the light to illuminate the darkness through conscious acknowledgment.

Mercury is still retrograde and has just crossed Pluto. The combination suggests a manipulative manoeuvre – power gesturing, or a backroom deal.

The sextile between Mars and Jupiter has some positive potential. It is visionary in nature, yet, Mars provides practical and determined energy to turn an idea into action.

In Capricorn, Venus is more industrious than in most signs. The trine to Uranus implies an unexpected stroke of luck, or at least her expectation of such a lucky incident, that may further her goals.

Chiron is still in that semi-sextile pattern with Uranus that has been with us since the beginning of the pandemic. With only a 1 degree orb, the situation looks quite critical, once again. The square from Venus signals that social issues related to the pandemic are still burning and easily ignite emotions.