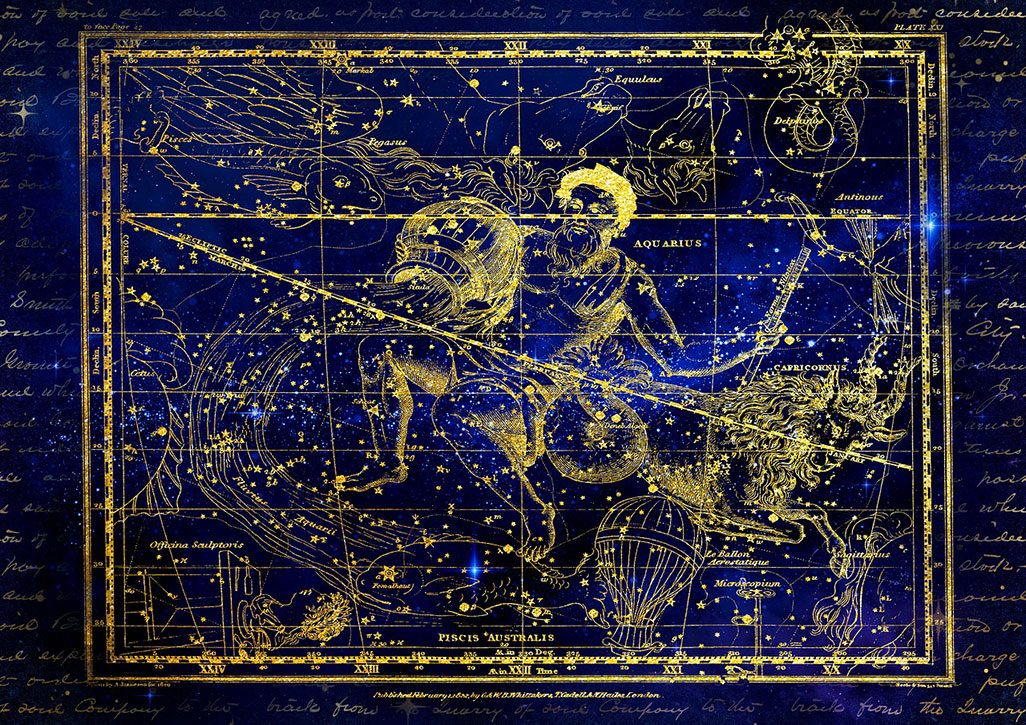 Aquarius, the Water Bearer, is depicted pouring a jug of water by his feet. It swells into a mighty river – the cosmic source of the River Nile. Every year its floods rejuvenated the valley, as the sediments restored the fertility of the earth.

In Greek mythology, the sign of the Water Bearer is associated with the beautiful youth Ganymede, a son of Troy. Ganymede was minding his own business when a mighty eagle descended on him, picked him up, and carried him off to Mt. Olympus.

It is not certain, whether Zeus, who was behind the plot, took the shape of an eagle and personally abducted the youth or whether one of his underlings did the dirty deed for him.

He fancied young Ganymede as his cup-bearer, a high-ranking position imbued with utmost trust. Ganymede’s job was not only to pour the divine nectar at the assemblies of the Gods, but to taste it as well – a risky business. Poisoning was a common and convenient way to get rid of rivals.

Psychologically, Aquarius signifies the part of the human spirit closest to the divine source. He enjoys the privilege of tasting the divine nectar, which opens his eyes to things that are beyond ordinary human consciousness. But not every inspiration is destined to become a good idea. Some can bring disaster, even if they look good.

Being a mortal, he wanted to help and inspire his fellow human beings. Yet, the gifts from another realm are also dangerous. The waters that restored life in the Nile delta could also bring death and destruction. The cup of enlightenment could also bring on madness.

Aquarius symbolizes that ‘in-between’ state – the conveyor, between the Gods and ordinary mortals. He is a visionary and a reformer, forever seeking ways to improve the human condition.