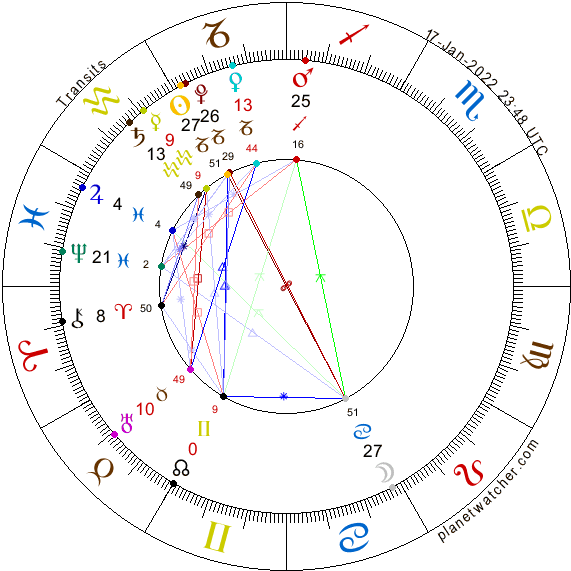 The Full Moon in Cancer is about processing the past. This is not a new theme, but we are digging down deeper now. Venus and Mercury are both retrograde. This is an opportunity to reflect or resolve an issue that arose at an earlier time.

The Sun is conjunct Pluto and tied into the mystic rectangle with the lunar nodes. There is a growing awareness regarding a power play, which is now under the scrutiny of the public eye. The balancing points are the nodes of the Moon. They help us to understand and integrate the issue that likely was hot some months ago. If we don’t want to carry it forward as karmic baggage, we need to learn its lesson, by facing the shadow.

Retrograde Venus is forming a semi-sextile with Saturn and Mercury. Someone is likely to withdraw or cut off communications. Perhaps to reflect on their conduct and interactions, but chances are, they are in denial. However, Saturn’s influence demands that we take responsibility and face the facts.

Mercury is retrograde, and conjunct Saturn. Communication is hard-going. As we attempt to get to the truth, matters become even more convoluted than previously thought. Instead of making a hasty judgment or decision, matters need to be evaluated in a more nuanced way.

Chiron is once again mingling in the Astro-mix. The sextile to retrograde Mercury and Saturn suggests a tendency to minimize certain facts, despite clear indicators.

Chiron is still locked into a semi-sextile with Uranus, a pattern that will continue until the summer. In the second half of 2022, the orb widens, and the impact is likely to subside. But for now, the familiar public health crisis is still very much a fact of daily life.

The Saturn/Uranus square was the dominant planetary alignment last year. We have watched it erupt in many parts of the world – most often linked to restrictions linked to the pandemic, but also in response to repressive governments in other contexts.

Uranus and Saturn are separating now but are still within orb. Retrograde Mercury adds to the cocktail, will try to obscure the facts, or strike a deal.

Sesquiquadrates are literally a square and a half – or, a big hand-full. The energy is discordant and jarring, with a display of wilfulness (putting one’s foot down), and an unwillingness to cooperate. Since Mars and Uranus are involved, this looks like a royal temper tantrum! This eruption may come quite unexpectedly. Someone needs to learn to control their emotions better.