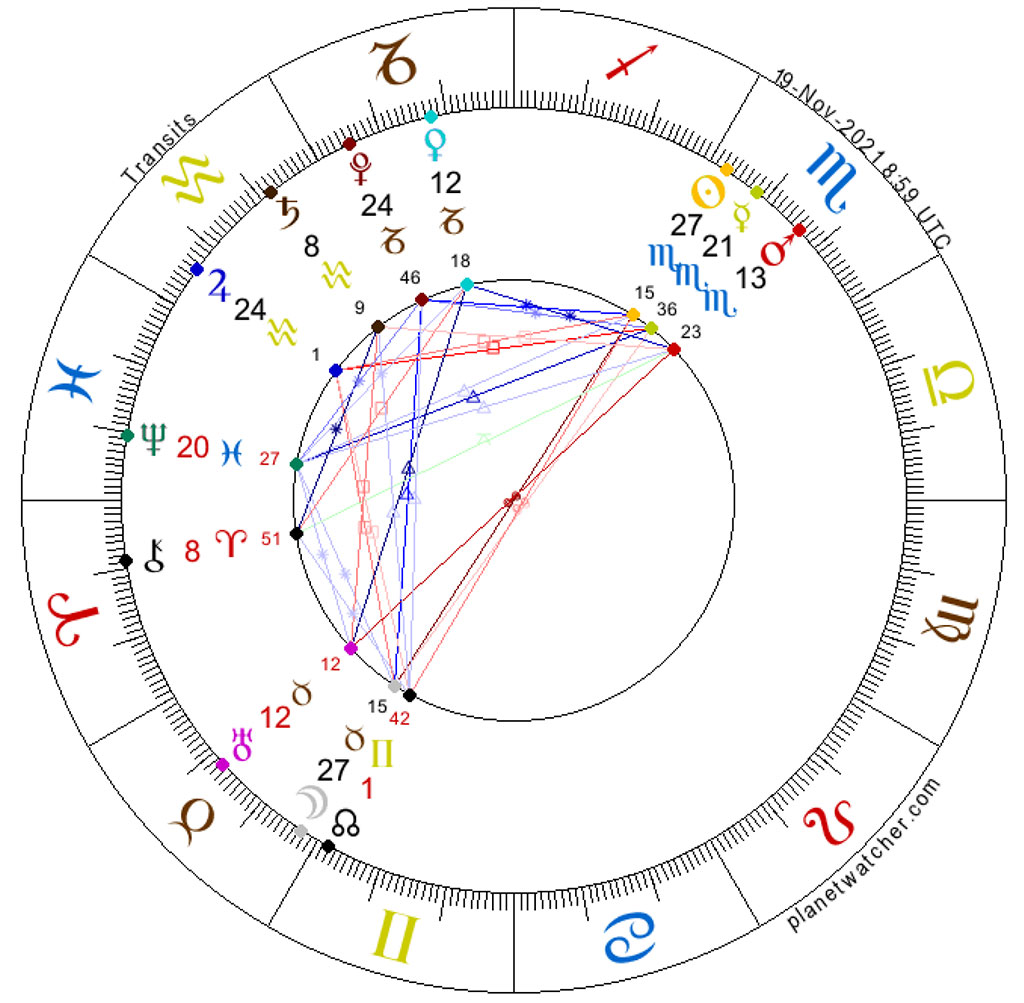 This Full Moon in Taurus brings us a partial lunar eclipse that will be visible in many parts of the world. It will also be unusually long, lasting 3 hours and 28 minutes!

In Taurus, the Moon signifies a need for security and stability. It represents the yearning to get back to some kind of normal and to feel safe doing business as usual. It also reminds us that security and stability are closely connected to the integrity, health and well-being of Mother Earth.

The Sun in Scorpio, on the other hand, signifies authority and power, but also the drive for renewal. It is about letting go in order to grow.

The Sun conjuncts Mercury, but Scorpio is also a secretive sign. Those in authority are not willing to show their hand. Deals are negotiated under the table or in back rooms. In mundane Astrology, Mercury signifies the media, as well as educators. In this case, the media acts as the mouthpiece of authority and serves the official spin. But what are we not hearing about? There is a lot more going on than meets the eyes or ears of the public. To save face, someone wishes to keep documents and talks secret.

Jupiter is squaring the Full Moon and Mercury. Jupiter stands for aspirations, hopes, and ideals. There is a certain amount of tension, and depending on whether one stands by the Sun, or by the Moon, the situation may look quite different. But still, everyone pins their hopes on Jupiter to sort it out. However, nobody is under any illusion that it will be easy to live up to the aspirations.

The other most striking feature of this Full Moon chart is the opposition between Mars and Uranus, also in Taurus and Scorpio. Both of these planets have aggressive or disruptive energy, and they are likely to make a display of it. There is a strong sense of disregard for conventions and norms. At the very least, expect audacity. But, this type of aspect can also signify literal upheavals, whether in the form of a social protest, an earthquake, or a volcanic eruption. It also tends to manifest on different levels in different places, so be warned.

The Mars/Uranus opposition has a ‘valve’, or pressure outlet, in Venus in Capricorn. This Venus is ambitious and means business. If she is to facilitate a compromise or a solution, Mars and Uranus must be willing to cooperate on diplomatic terms and think pragmatically.

Interestingly, the Full Moon/ Mercury pattern has a similar ‘valve’ planet. In this case, it is Pluto, the lord of the Underworld. Pluto, also in Capricorn, is much less diplomatic about it. To him, it’s a question of sink or swim. It is not much of an option.

Jupiter also ties into this pattern, but with a bit of a challenge. He casts a semi-sextile to Pluto. Semi-sextiles are not very strong aspects. However, they signify a resource. In this case, Jupiter is the resource that can tip the balance towards ’swim’.

Neptune and Mercury in trine can be inspiring or delusional. The narrative is important, but it has to mean something, or it is just a fairytale. Words are cheap, but disillusionment is bitter.

Finally, Saturn casts a tight sextile to Chiron. Sextiles represent learning opportunities. They stimulate a mental process. Saturn urges us to be responsible and apply to the present situation what we have learnt in the past. This is likely to require some sacrifices and limitations but with the promise of healing.

Saturn and Uranus have been holding a square pattern all year, sometimes wider, sometimes tighter. It represents the constant struggle between freedom and responsibility, liberty and authority, and intimacy and autonomy. It is an illusion to believe that the ideal point can ever be found and fixed in space. Rather, these two principles demand a constant balancing act, which at times is more of a tug of war.