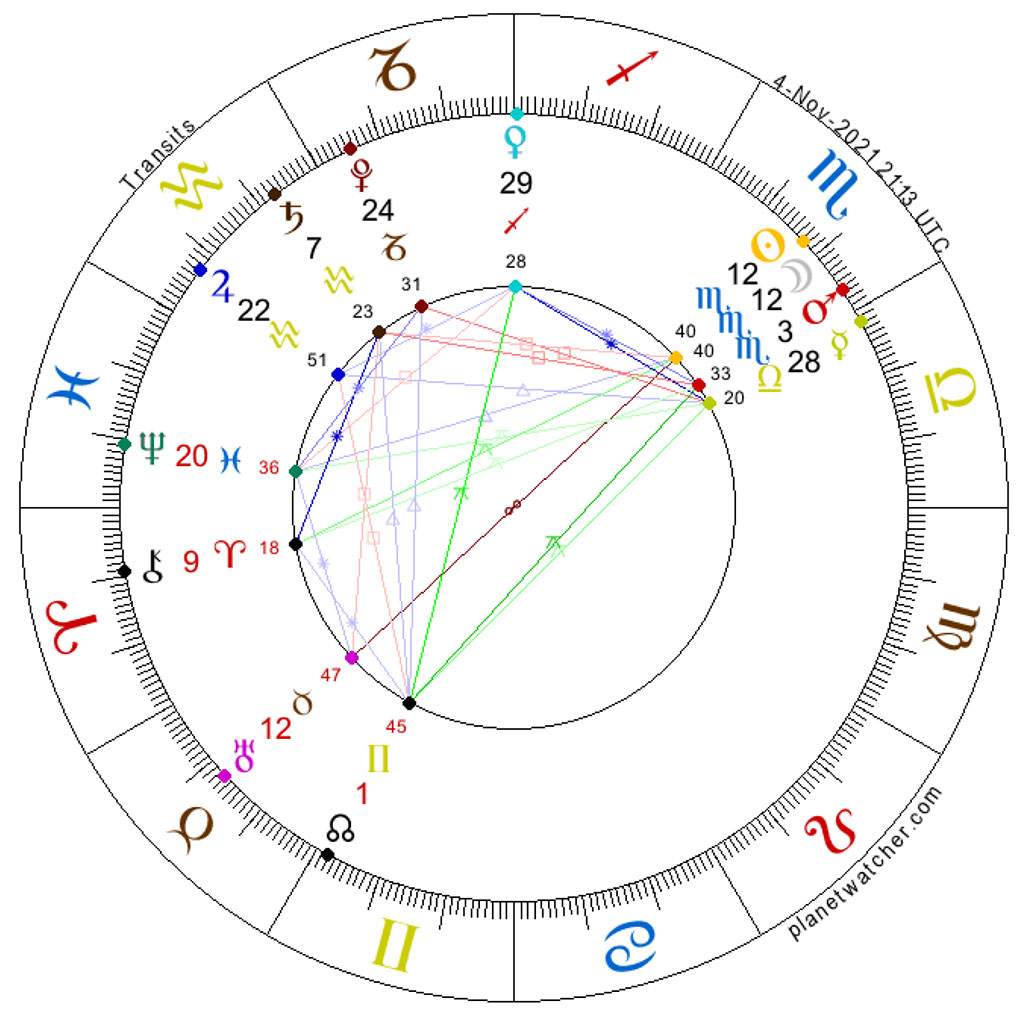 New Moons are about new beginnings. In Scorpio, this goes a lot deeper than just willy-nilly trying out something new. It is more cathartic, which is especially true of this New Moon, which takes up position in exact opposition to Uranus in Taurus. This calls for far more of a transformation than just changing the wallpaper. It demands a revolutionary shift, a paradigm change. On a social level, the world is watching what is happening at the climate talks in Glasgow. The message couldn’t be clearer. Disagreements will add fuel to the fire. Some are calling for a radical change, while others are still dragging their heels.

This opposition is casting a wide square to Saturn. The Sun and Moon will swiftly move on, but the square between Saturn and Uranus will get tighter until it becomes exact in December. The pressure is on and will stay on – change is in the air!

The effects of the signature pattern of this New Moon is not restricted to global affairs but can also leave a mark on personal lives. Those with planets or horoscope points around 10 – 14° degrees of the fixed signs are particularly affected. This is a potent New Moon for new beginnings and indicates a fundamental shift. Lip service won’t do.

The sextile between Mercury and Venus suggests a cordial note and favours artistic expression and projects. Both Mercury and Venus are on the verge of changing signs. On November 5, Mercury will be moving into Scorpio and Venus into Capricorn. This will change the flavour of social interactions. Venus will be staying in Capricorn until March next year, which is an extraordinarily long time, even though she will be retrograding for some of that time. In Capricorn, Venus means business. She is diplomatic but hard-nosed and all business. This is about serious commitments, agendas, terms and conditions. Mercury, on the other hand, will whizz through Scorpio and shake things up, especially when he gets into the thick of things with Mars and Uranus, in about a week.

Jupiter midpoint between Neptune and Pluto

Jupiter is casting semi-sextiles to Neptune in Pisces and to Pluto in Capricorn. Semi-sextiles are not all that exciting in a Moon chart, like this. However, Jupiter is the midpoint between Neptune and Pluto. He is the mediator between these two planets, and it seems like Jupiter, who embodies the principle of hope, takes a very auspicious position at this crucial moment in time.

Although at first, the chart looks a bit scary, given its emphasis on disruptive Uranus, there are quite a few positive and hopeful features as well. But to make the most of it, we must embrace change and understand that this is not a time to maintain the status quo.