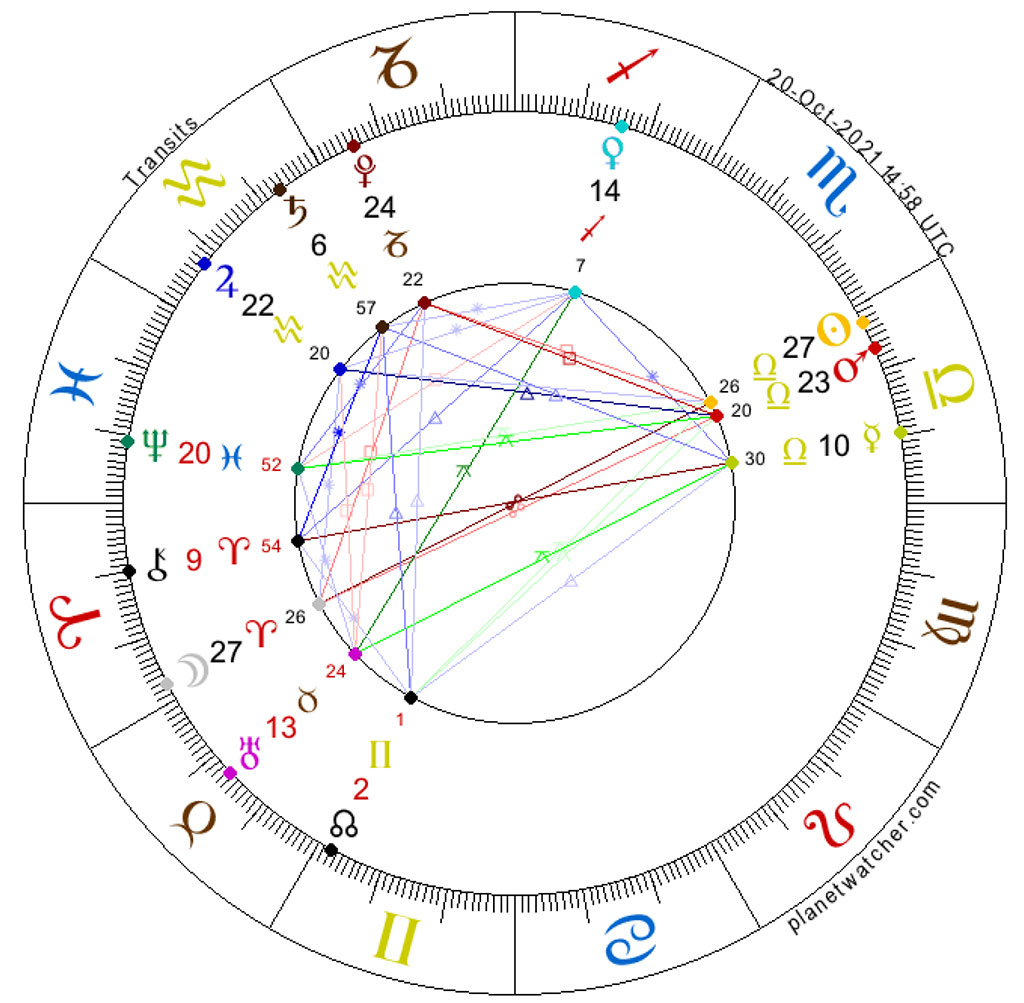 Sun in Libra opposite Moon in Aries

The Full Moon in Aries theme is about balance. The Sun in fair-play, rational Libra aims at balance and harmony, but the Moon in Aries can be rather more tetchy. The Aries/Libra polarity is always about reconciling our more selfish impulses with the need to be liked and accepted. It illustrates the difficulty of ensuring that one’s own needs are met while also considering the needs of others. Who will get their way? Can a compromise be found that all parties can agree to, or is it a question of my way or the highway?

It’s complicated at the best of times, let alone when Mars gets involved.

Mars has been travelling close to the Sun for some time now, putting fire to the wire and motivating the Sun. But he is also a quarrelsome fellow who can be passionate to the point of fanaticism.

Now, the Moon is in Aries, Mars’ own sign, while the fellow himself resides in Libra, his weak spot. The Moon in Aries can be irritable and impatient. At the best of times, Mars in Libra is a peace warrior, fiercely defending the principles of justice and peace. On the other hand, he can be so indecisive that he fails to make a move, and having to deal with the consequences of inaction.

Jupiter has just gone direct and Mars is trining it. Enthusiasm is half the ticket to success, and this combination sparkles. However, Mars also squares Pluto, which is a whole different ballgame. Squares mean tension and stress. Pluto has a way of flexing his manipulative muscle, undermining Mars and Jupiter? It is not easy to stand as one when someone is playing divide and rule politics.

Mars is just separating from a quincunx with retrograde Neptune. Much murky stuff has been revealed throughout this quincunx period (since July). We will have to see if any of those revelations will be brought to justice or simply be swept aside. The jury is still out.

Mercury went direct a couple of days ago. It will take a bit of time before he gathers speed again. On this Full Moon, he opposes Chiron, who is still retrograde and trining Saturn. Once again, the focus rests on the conflict between social rules and individual rights regarding their health decisions.

A bit of an outlier in this chart is the quincunx between Venus and Uranus. Unusually, neither forms any other significant aspects. This awkward aspect signals disruption, most likely, via the voice of a woman.