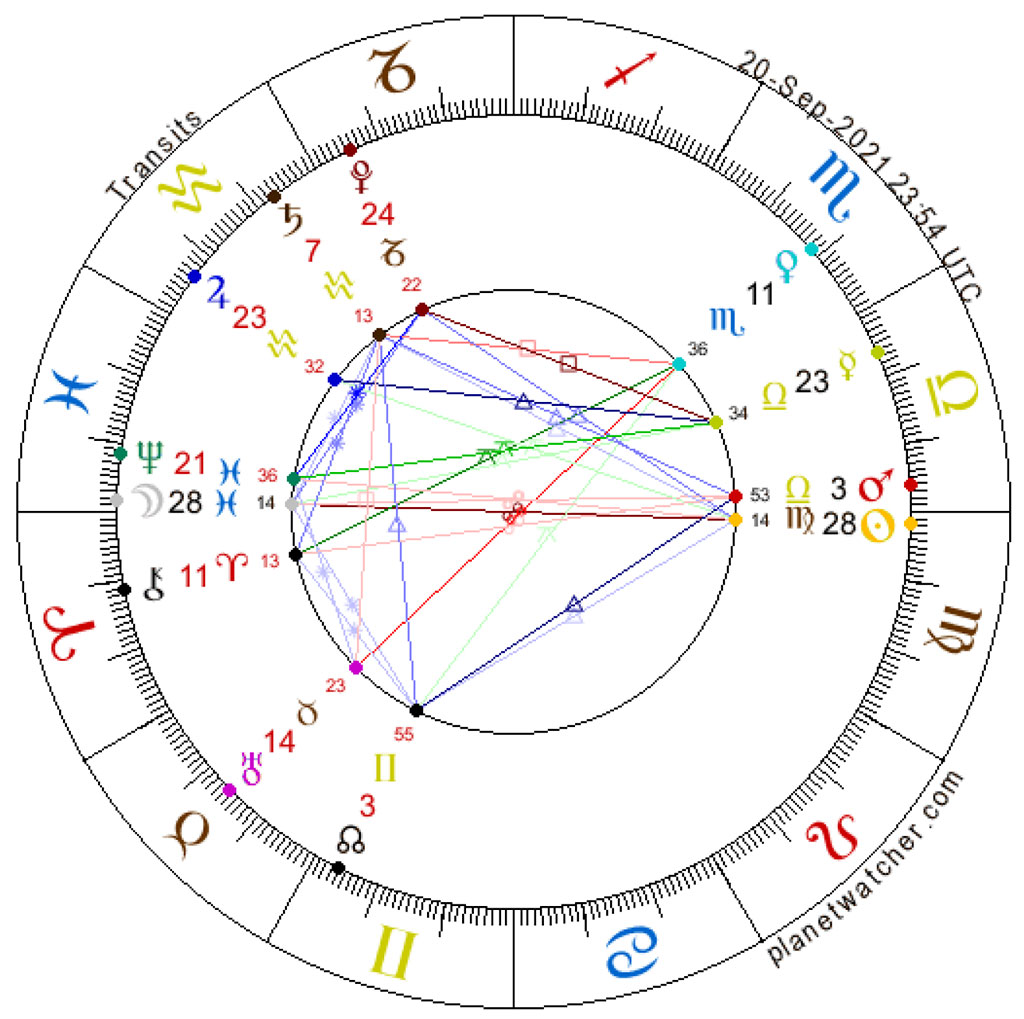 Conjunct with Neptune, the Full Moon in Pisces is exceptionally watery. Among many other associations, Neptune is the God of tsunamis, earthquakes, landslides, and erosion. He has always felt a bit disadvantaged for only having been given the oceans to rule. Thus, every now and again he tries to conquer a bit more territory for himself by shaking the earth, causing tsunamis, and landslides. This theme seems to be acted out at present in La Palma.

The Sun in Virgo, is conjunct with Mars, although dissociated as Mars has already moved into Libra. Natural disasters are becoming more frequent and demand an effective response. We are at the mercy of the great gods of nature, but we can mitigate the effects of their tempers. The Piscean compassion and idealism needs to be channelled into practical applications. The Mars component of this Full Moon chart suggests a certain missionary zeal, but the Sun grounds it all in Virgoan pragmatism.

Mars is also tied into a grand trine, together with the North Node in Gemini and Saturn in Aquarius. Social and environmental issues are in focus, and Mars’ connection to the Full Moon indicates that he has a pivotal role in this constellation.

Mercury in Libra believes in the abstract concept of justice, and in trine with Jupiter, has faith in humanitarian ideals. But the quincunx to Neptune suggests that ideal and the suffering in the real world are sometimes worlds apart. In theory, there should be justice, and equality for all, but in practice, there are infinite stories of human suffering. Ideals alone are not the solution.

The opposition between Uranus and Venus bodes unforeseen upheaval in matters of the heart. A drive for independence is at odds with emotional insecurity and control. Venus also forms a quincunx with Chiron. Reconciliation can come about through a head-on confrontation, rather than round-about manipulation. But that may be difficult since in Scorpio Venus is very guarded.

The Moon and Neptune are also connected to Pluto by sextile, with Jupiter at the midpoint in Aquarius. Herein lies the potential for the development of visions and solutions that are realistic and future-orientated. Jupiter embodies the principle of expansion. The outer planets are all currently retrograde, which implies an inner process of reflection that heralds change. This is the period of gestation before change manifests in the outer world.