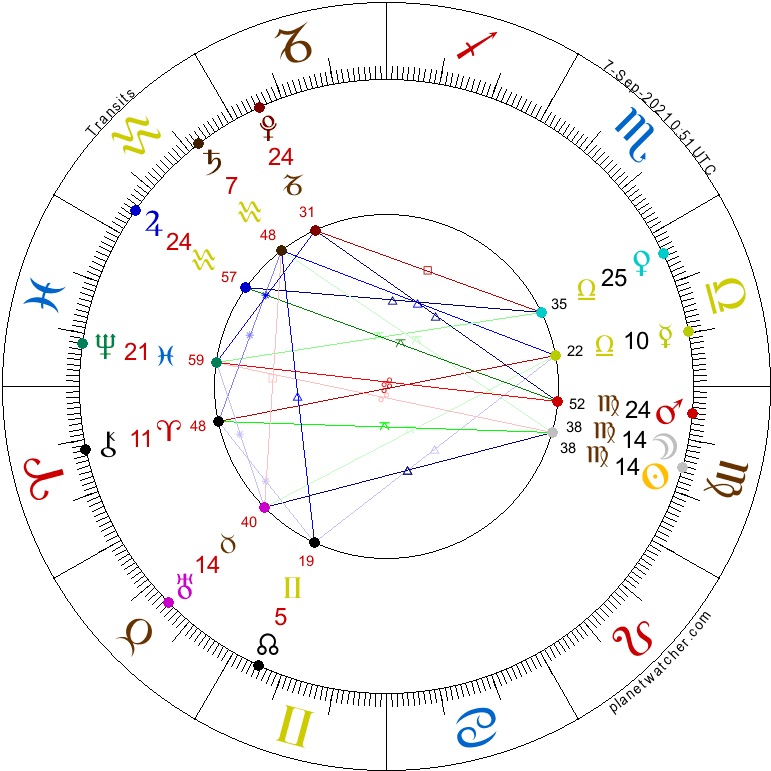 The New Moon in Virgo heralds new developments. Virgo is a practical sign, discerning, efficient, analytical and critical. At times, it can be a bit too cautious. Instead of taking up a challenge, it prefers to sit on the fence. That will not be the case on this New Moon, even though there is only one strong aspect to the New Moon: it is a trine to Uranus.

Uranus in Taurus has rocked our boat quite a bit since it first entered Taurus. In particular, the threat of looming environmental crises has increased dramatically. In concert, financial markets have also become much more volatile. These two are, of course, related in various complex ways.

Uranus being so prominent in this New Moon horoscope indicates a high likelihood of a sudden shift, a New Moon X-factor so to speak. But Virgo is a nifty sun sign, and incredibly resourceful when it comes to emergency preparedness. Other sun signs may find Virgo’s efficiency amusing and smirk at its tendency to not just have ‘plan A’ worked out in detail, but also plan B and plan C. But when push comes to shove, Virgo knows what to do. Virgo’s approach to spontaneity is not a laissez-faire attitude, but swiss-army knife multi-competency capability.

This aspect highlights the battle between the sexes, which is not only epitomized in archaic power structures in far off places like Afghanistan, but can be seen as a worldwide phenomenon. Physical, verbal and legislative violence against women and LGBTQ people is rampant everywhere. Male identity warriors respond to a perceived threat of egalitarianism with the utmost force of oppression.

On a micro-level, such control issues can also bubble up in personal relationships, especially if these planets are interacting with planetary aspect patterns in your natal horoscope.

This aspect pattern acts almost like a counterweight to the Mars/Venus/Pluto aspect described above. Here we see Venus getting support from Jupiter, who in Aquarius stands for humanitarian and liberal values. However, the quincunx to Mars shows that enforcing such values can be difficult if the executive arm of the administration refuses to cooperate.
On a micro-level, personal ideals and values do not seem to match everyday behaviours. Or, the aspect might manifest as a yearning to break out of daily routines which, however, clash with pressing needs that demand attention to the details of a current situation or task.

Mars has been hovering in opposition to Neptune since the beginning of the month. On this New Moon, it has moved on a few degrees, past the opposition point. Yet, its influence can still be felt. Mars opposite Neptune can be frustrating. It makes it very difficult to focus. Imagine the dissipated power of a sandstorm compared to that of a highly focalized sandblasting machine. Mars needs a clear focus to be most effective. But opposite nebulous Neptune, he does not know where to strike. Without a clear focus, Mars feels a bit adrift.

In the natural world, this kind of aspect can also signify chaos brought on by natural disasters.
On a micro-level, the aspect pattern is likely to express itself more metaphorical. Neptune may come as confusion, amnesia, lack of concentration and energy, or wishful thinking. We may project the enemy within onto some outer object and grind the battleaxe.

In the social world, we have reached the end of the summer holidays. There is a great deal of uncertainty about how the pandemic will continue to unfold as we face the dark, cold flu season. It has become increasingly difficult to enforce and uphold lockdown conditions. There are likely to be more arguments over which measures will actually work.

Although the most prominent planetary signature of the pandemic (Uranus semi-sextile Chiron) has been separating since May, we need to stay alert. Uranus and Chiron will have their final semi-sextile encounter next April, although the aspect will not be exact again. Still, we are not out of the woods quite yet.

There is another opposition in this chart: Mercury and Chiron. It might focus the spotlight on another emerging variant. At any rate, health matters are in the news again.